Risk Appetite Opens the Week at a Conspicuously Uneven Gait

Speculative enthusiasm was off to an uneven start Monday – a consideration that may have been missed if you only look at one benchmark for your evaluation of market sentiment. Consulting measures like emerging market, junk bonds or high-profile international indices; it would seem that confidence was on the wane. However, there remained a very prominent counterpoint to this soft performance: US stock market benchmarks. The broad S&P 500 and blue-chip Dow were both up on the day, but the most impressive performance was definitely from the tech-heavy Nasdaq. While the former are approximately 14 and 18 percent off their record highs respectively, the NDX is only 4.6 percent from its February peak. This internal (US indices) preference reflects upon a sectorial appetite that seems to highlight the appetite for momentum over ‘value’ that is more prominent across the financial system. 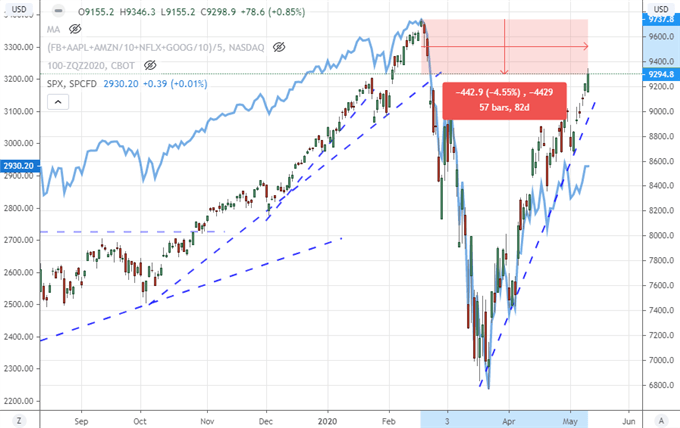 As the tech sector and FAANG index pace risk appetite without the broad market backing up the steadfast drive for global assets, it is worth asking ourselves: what kind of climb are we looking at? I consider the most robust foundation for speculative markets to build momentum upon is one in which there is an indiscriminate risk appetite. That is not what we are dealing with currently. While a preference does not necessarily translate into a drive that is destined to falter, it is a backdrop where the subsequent waves are that much more critical to realize. Otherwise, momentum will fall apart. Though I ran this poll at the end of April, I asked Twitter again what they though of the S&P 500’s climb – whether it was a lasting bull trend or temporary bounce in a longer-term tumble. The previous results reflected an 81 percent view that the bigger trend was bearish and we were currently in a temporary ‘bear market rally’. Part way into this iteration, the approximate 130 participants offered up a 75 percent dovish call. 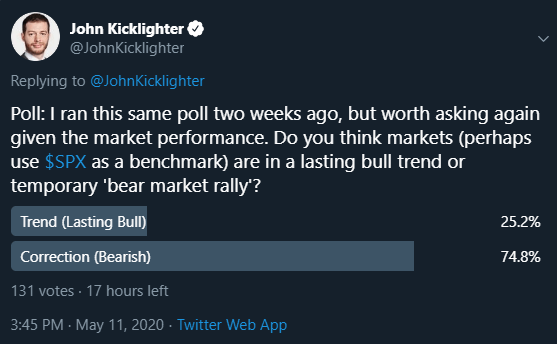 Fed Official Seem to be Offering Forward Guidance Ahead of Powell

Thematically, the markets have been pushed and pulled by the familiar culprits of the past month. As an overview, headlines of select and throttled economic reopening were feeding some measure of confidence, but a start lower for US markets had the narrative following speculation of a possible resurgence in Coronavirus cases. Of similar interest were the reports that the US-China reversion to open trade wars was gaining traction. Remarks from President Trump continued to foster fears that the White House would reverse course of trade agreements, while China took a page from their playbook by relaying the possibility of reviewing the trade agreement via Global times. At the center of this uncertainty remains the Dollar. Yet, that doesn’t seem to be a top concern for the benchmark. Despite the uncertainty in Monday’s fundamental backlog, the DXY Dollar Index posted an impressive rally. That likely owes considerable lift to the more neutral language to come from key Fed officials ahead of Chairman Powell’s event Wednesday. The downplay of negative rates by Bostic and Evans today seems like a concerted effort to direct expectations. If the various Fed speakers today follow the same script, it will make a far wider impression. 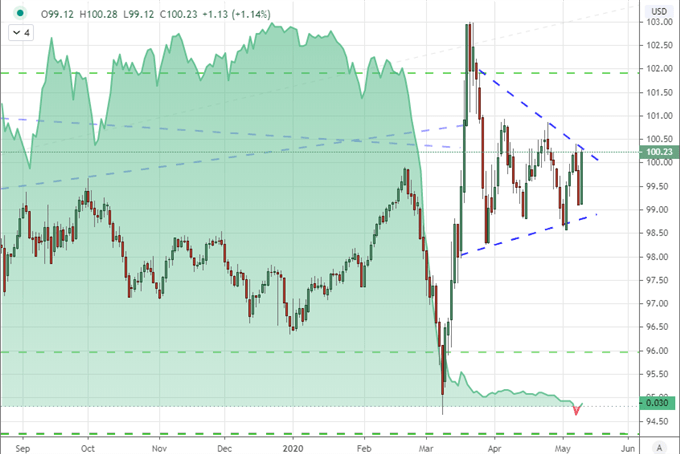 Interest rate expectations backed out of Fed Funds futures reveal that the speculation of negative rates come the end of the year remains loosely in the very restrained speculative hike backdrop – though only marginally. I will watching the December 2020 and June 2021 contraction closely. In the meantime, it was remarkable that the DXY managed a strong rally this past session even though EURUSD was relatively little moved. On a trade weighted basis, the benchmark pair accounts for approximately two-thirds of turnover around the Dollar; so the disparity is one to note. 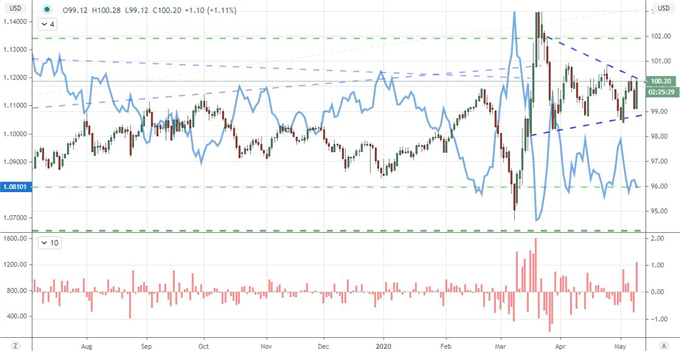 As we see critical deviations in speculative and haven milestones, it is important to keep track of the more prominent fundamental themes along the way. Recession seems an inevitability at this point, but the subsequent pace of recovery – whenever that is to happen – remains the most critical matter at hand. I did a google trends search to see the interest behind different styles of economic turn. While these terms may be associated to something more mundane, the rise in interest since March suggests a more economic matter. ‘L-shaped’ is the leading reference which would be an exaggerated recession. The U-shaped recovery meanwhile seems to still lead a fanciful V-shaped reversal. Given the frequent talk of a second wave to the pandemic, I’m surprised W-shaped doesn’t garner more attention.

In contrast to the trouble that lies ahead, stimulus still a bright spot for the hold out optimists. On the US side, the hope that the Fed will still entertain a negative rate policy continues to play to an external support perspective – though the existing moves to bolster junk assets seems to have already expended its well of enthusiasm. Meanwhile, reports that the European Commission may bring suit against the German high court for its ruling on the ECB’s stimulus purchases these past five years may warm some latent optimism. 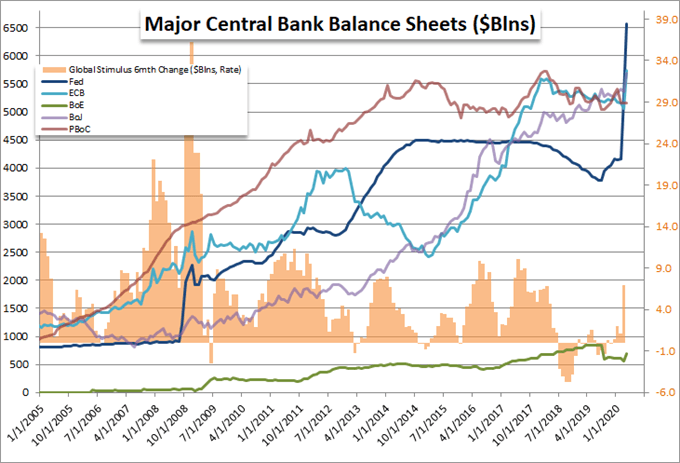 Chart Created on John Kicklighter with Data from Bloomberg