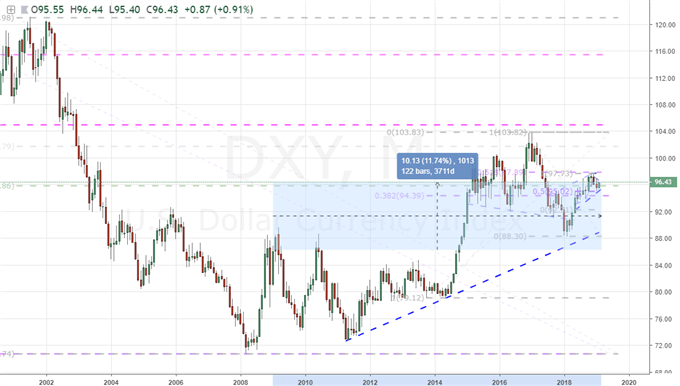 Number One Spark for a Dollar Bullish Resurgence

See how retail traders are positioning in the Dollar through pairs like EURUSD, GBPUSD and USDJPY as well as indices, gold and oil intraday using theDailyFX speculative positioningdata on the sentiment page.

My General Bias on the Dollar: Bearish

The Greenback seems a fundamentally-buoyant currency. Over the past decade, the currency has gained notable traction (the DXY index is currently up over 11 percent from its position back in February 2009) which seems reasonable against the backdrop of growth, the execution of a successful monetary policy regime, the rise of its carry trade status and eventual transition into a nationalistic economic policy focus. Those were certainly bullish contributions in previous years, but the picture has since changed significantly. The global environment that previously supported the qualities typifying the Dollar's appeal has steadily eroded in recent years. As growth forecasts, appetite for slight yield advantages and optimistic forecasts for a blind reach for capital gains have receded, the Dollar's appeal has found itself grounded.

Chart of DXY Dollar Index and Change Over Past Decade (Monthly)

In past years, all the fundamental stars seemed to align for the Greenback. The Fed was the first to adopt the unorthodox stimulus effort at scale and subsequently was the first to normalize after some degree of success through the initial effort. Rate hikes in a environment where aggressive speculative appetite would prize even small yield advantages sent plenty of global capital into the US capital markets. In the meantime, investors maintained a general assumption that should trouble return in some unforeseen turn of fate, the Dollar would quickly jump back into its role as an ultimate safe haven. Outside sentiment, economic activity was chugging along nicely and the new government supported business-friendly policies like tax reform and looked to afford the domestic economy further advantage through aggressive trade policies. Everything seemed to back the Dollar until market priorities started to change. After ECB rate speculation started to pick up through 2017 and then risk trends took its first serious dive in February 2018, the Dollar's untouchable bullish status began to unfurl. Should conditions continue to improve globally, other currency's benchmark rates would start to converge with the Fed Funds rate and cut the Dollar's unique advantage. While severe risk aversion could leverage the absolute liquidity appeal of the USD and its Treasury and money market backing, anything less than a crisis could see capital flee the US for its anti-global policies and carry trade stockpile. 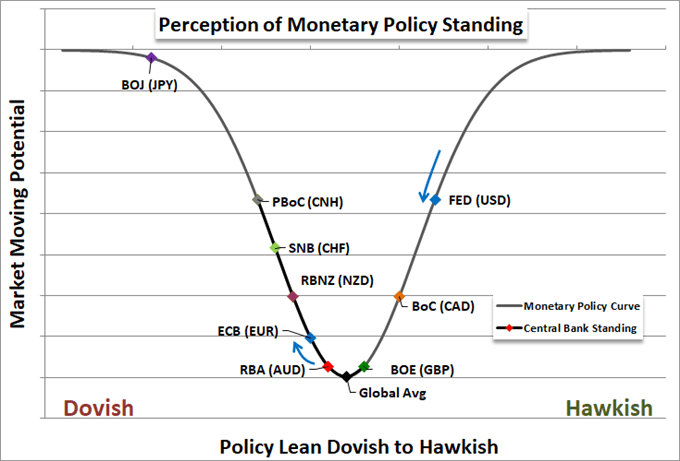 With volatility signaling something of a permanent presence in the global markets, the US doubling down on its provocative trade stance with partners, the Fed backing off of its steady pace of hikes and growth signals (from quantitative data to qualitative sentiment surveys) souring; the list of reasonable sources of strength for the Dollar has dwindled. However, the outlook is not completely devoid of possible support for the Dollar - if it were, the currency would already be deep into its collapse. Recent history has shown us another source of strength for the US currency: the collective weakness of its most liquid counterparts. If the Euro, Japanese Yen, British Pound, Chinese Yuan, Australian and Canadian Dollar were all under pressure for various (or the same) reasons; where would the capital go? I am an advocate for Gold as an alternative to the collective of 'fiat currency', but its liquidity is ultimately limited. When there is a crunch on two or more of the most heavily traded currencies, market participants usually seek out the next most liquid option for safe harbor. The Dollar is the FX market's most liquid currency by a wide margin. So, as long as the market implosion does not originate with or somehow directly tie into the USD, it will draw a disproportionate amount of interest.

Chart of Most Liquid Currencies According to BIS Triennial Report 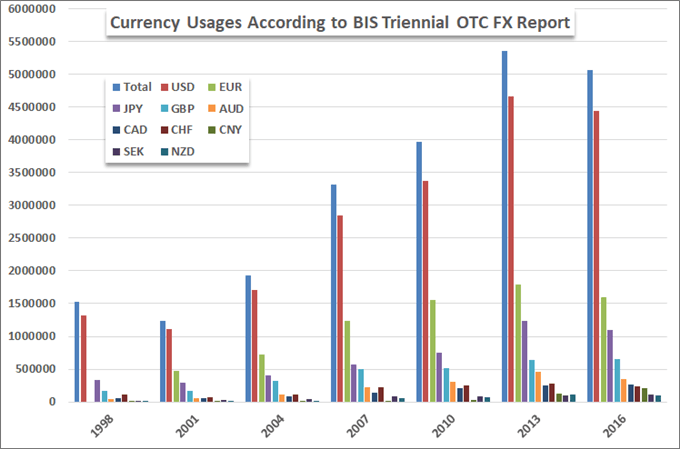 The Most Prominent Event That Can Leverage Dollar Appeal

If we filter through the various scenarios for which pain would be inflicted more readily against key counterparts without directly effecting the US currency, one particular event seems to stand out above all others: Brexit. The UK's separation from the European Union (EU) is proving a messy affair with seemingly no happy medium between the parties which raises the probability of a 'no deal' scenario. That would entail a break with no established trade relations which both the governments and central banks on both sides have warned would be a significant burden. While there may be a heavy toll on one economy and financial system over the other, it would be a serious negative impact for both. If both the Euro and Pound (as well as the financial systems that they represent) see a flight of capital, the only viable alternative with an abundance of liquidity would be the US Dollar. As March 29 (the end of the Article 50's two-year countdown) approaches, the reality of pain sets in. If we fall into a no-deal scenario or it seems inevitable, this my prove the most capable amplifier for Dollar bulls. 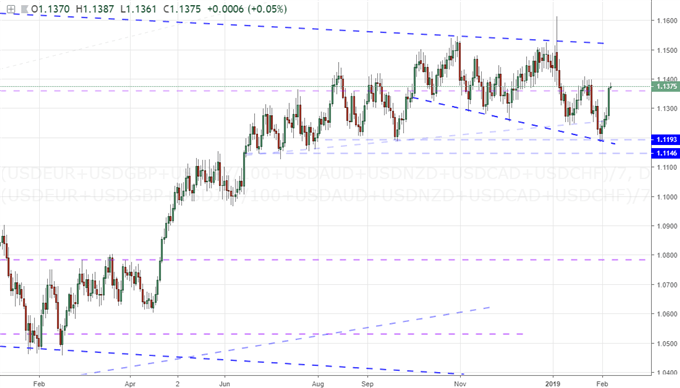