S&P 500 Threatens to Close Gap, How Much Drive Will Yellen Provide Dollar?

• An AUD dive offered Thursday's biggest move; a heavy event risk of PMIs, Fed speak and sentiment surveys are ahead

When markets are saturated on a fundamental theme or through a speculative view, it takes more motivation to generate the same level of progress. That stubbornness is showing through for both the US Dollar and equity indexes. For stocks, the glow of Wednesday's remarkably surge higher did little to inspire follow through. Despite record highs, the biggest bullish gap in eight years (S&P 500 specifically) and a drive that tallied gains 13 of 14 trading days (Dow); the markets suffered their biggest drop of 2017. President Trump's reiteration of forthcoming tax reforms and plans for a large stimulus program catered to speculators' favorite sources of optimism as of late; but the need for details like scope, scale and agreement seem to be critical to letting trends run.

As further fundamental support arises from the same source with lackluster result, speculators will grow increasingly unnerved. There is a heavy dependency on momentum for capital gains to compensate for the dearth of income to be found in the global market. When traders aren't reassured of their risk with further market gains, a crisis of confidence will quickly arise. This speculative dependency and complacency will eat at traders that jumped into the surge higher Wednesday as benchmarks like the S&P 500 threaten to 'close the gap' - a technical imperative. Looking ahead to the final session of the week, there is plenty of event risk; but none of its speaks to what is currently responsible for keeping the plates spinning.

The same costly fundamental heft will be applied to the Dollar moving forward. Though it garnered less attention that the upcoming Fed Chair's speech, Board Member Lael Brainard's remarks this past session represented a critical escalation of rate potential. Fed Fund futures already peg a hike on March 15 above 80 percent. Yet, the group's most dovish member capitulating to a unified view of accelerating tightening (a number of officials have suggested March is 'live') adds serious weight to a much more timely tightening. While the DXY Dollar Index took out near-term resistance with her fold, the drive was lacking commitment. EUR/USD ultimately held 1.0500 while other key pairs stayed well enough away critical technical levels. Can Janet Yellen and Vice Chair Stanley Fischer add heft to conviction and amplitude to the Dollar? What will happen with the AUD/USD's strong downdraft into range? Are oil and gold tipping into reversal? We discuss this and more in today's Trading Video. 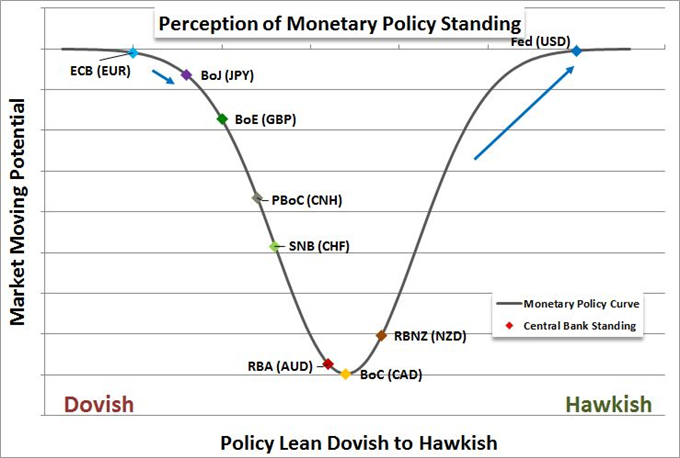 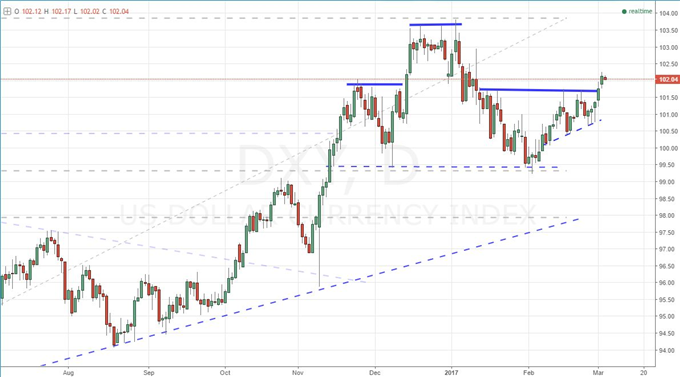