On Monday, gold price broke above a confluence of resistance lines running down from February and over from March, a pair of lines that made up a descending wedge pattern that has been negated. The breakout was convincing and so thus far holding up with relatively well.

The breakout and subsequent price action is setting gold up for another possible leg higher towards resistance around the 1308/1310-mark. There is, however, a wedge developing which could either turn out to propel gold higher or mark the end of the up-move and set into motion a decline.

If the rising wedge is to come to fruition it is preferred that it fills out a bit more, which means at least another touch of the underside trend-line before chalking this up as a clean formation. Stay above the underside line and the bias remains tilted upward, with a breakout above the top-side line leading to the aforementioned 1308/10 area and possibly an even bigger breakout.

An eventual undercutting of the bottom-side of the pattern will be a bearish event that would likely lead to a move back towards the August trend-line (~1280) which was held twice over the past three weeks. 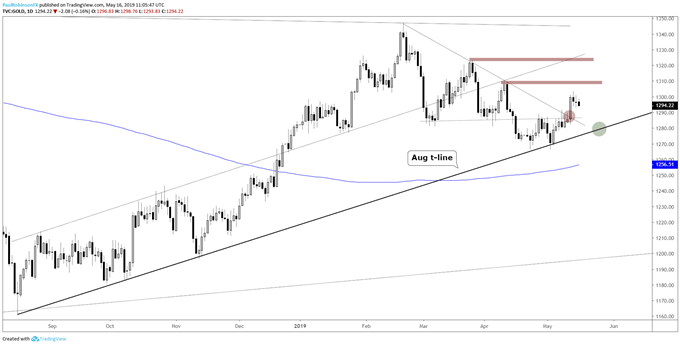 The trend-line dating back to the February high continues to be an impressive source of resistance for silver as it keeps the precious metal edging lower. This line makes up the top-side of a sizable falling wedge. We saw a false breakdown to start the month which was quickly taken back; could the fake-out breakdown turn into an upside breakout?

A convincing break of the top-side trend-line of the pattern and move above the 200-day into the 15s may do the trick. Continued failure to rise above the trend-line may eventually lead sellers to gaining full control and a break of May 2 low at 14.56; with the 14-area initially targeted in this outcome. Either way, the pattern has a lot of pent up pressure, so a big move could soon be in store.