S&P 500 and Dow now both in record territory

Both the S&P 500 and Dow are trading in record territory, leaving them without resistance. This gives the market room to run, but doesn’t necessarily leave traders with good risk/reward at this juncture. Equity markets are known to break to new highs only to dip before trading higher.

With that in mind, those who bought the last dip may want to implement a trailing stop of sorts to let profits run, but fresh longs may be best reserved for the next minor string of weakness or consolidation period.

Shorts have no appeal at this point outside of perhaps intra-day scalps, otherwise the time for being a steadfast seller will be best put off until the market shows real signs of wanting to trade lower. Bottom-line, as long as the trend-line from June acts as support the S&P is positioned to keep moving higher in the near-term. If it breaks, that may create a little room and momentum down to 2872 for selling. 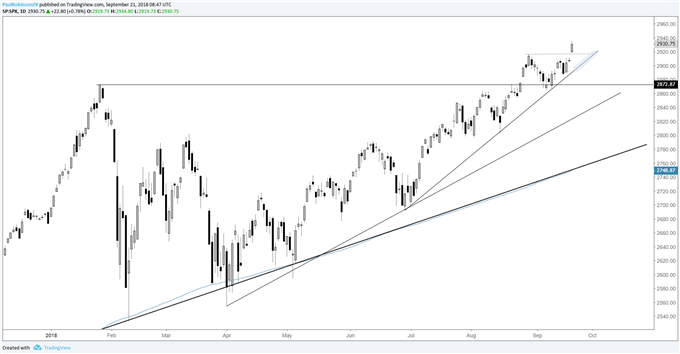 The Dow finally played catch-up and carved out a new record high from January, the last of the three major indices to do so. As is the case with the S&P this gives it room to go, but we also have to be mindful of the fact it just ran a good distance from the 25800-support level. Waiting for a pullback or consolidation period will help improve risk/reward on new long entries. Even if drops back below the old record high, as long as the trend-line from June holds the trend remains well intact.