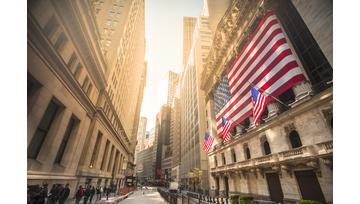 S&P 500 in Record Territory, but New Long Entries Need to Be Picked Wisely

Find out what is driving the S&P 500 and other global markets this quarter in our Q3 Forecast.

Prior to Friday’s breakout to new record levels we laid out scenarios which could happen around the highs set in June. The bullish scenario first involved seeing the S&P 500 break to new record highs, but wouldn’t be centered around paying up and buying new high prices. This hasn’t been the most fruitful way to enter the market, and often times resulted in failed breakouts before seeing new record levels achieved. The best tactical approach over the years for entering equity indices has been on pullbacks.

The S&P is trading not far above the June 19 high at 2354, so any pullback from here would be rather shallow if the old high holds. Nevertheless, if a test of former highs is successful then it could lend to an entry with a stop placed below the swing-low on the retest. The issue longs will quickly face in this scenario, though, is resistance closely positioned overhead in the form of the March top-side trend-line and underside of the November slope. This makes the current situation a bit tricky.

The top-side lines aren’t considered the most steadfast given they are moving in the same direction of the trend, but can still be problematic if the market doesn’t find the fuel to push through. A more ideal scenario would be if the S&P can consolidate between the old highs and noted lines of resistance. The holding of new highs and coiling price action could provide the fuel needed to bust through the upwardly sloping lines.

Should we see the S&P fall back below the old highs at 2354 and take out the Friday low at 2446, then the failure could lead to short-term down-side momentum at the least. But at some point this might be a good scenario for loading up on a long for another push higher, assuming we don’t see too aggressive of a decline. The trend-line from May extending under this month’s low may be a spot we see buyers step up on weakness should we see price action play out in this fashion.

The bottom line is this: Appetite for stocks is still very much alive, but traders need to be careful about how they enter the market at this juncture. 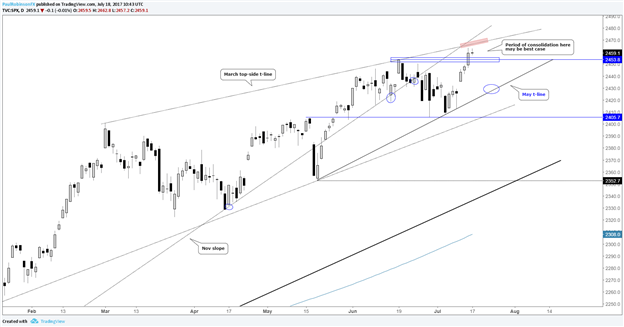