As New Zealand vaccination rates rise – currently with 75% of adults having had at least one shot – Prime Minister Jacinda Ardern has said that lockdowns could come to an end in the near-future, when the country reaches a 90% vaccination rate.

While New Zealand has moved away from its most stringent lockdowns (minus Auckland), it remains likely that the Reserve Bank of New Zealand will raise its main interest rate when it meets again at the start of October (current pricing vis-à-vis overnight index swaps suggests a 91% chance of a 25-bps rate hike).

With China’s Evergrande fears fading into the backdrop, and US equities on the march higher again, it may be the case that the New Zealand Dollar is well-positioned to follow risk trends higher. True, the Kiwi’s bullish breakout attempt in early-September was rebuffed. But price action in NZD/JPY and NZD/USD rates at the end of the month is telling a different story. 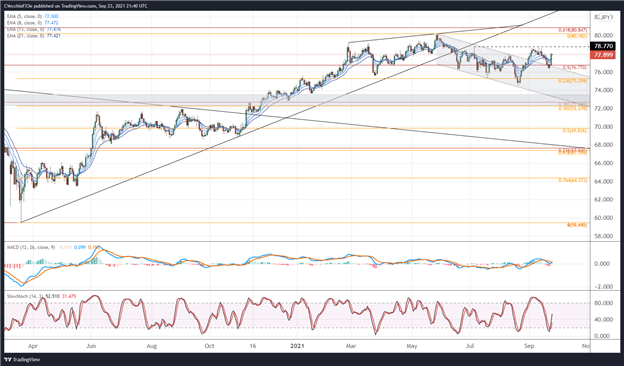 When we last checked in on the two major NZD-crosses, it was noted that “the pullback in NZD/JPY rates from their July high (78.77) may prove to be a symptom of broader risk trends rather than any weakness in the New Zealand Dollar itself. In the grand scheme of things, the slight dip at the start of September may be nothing more than a bout of profit taking after an exceptionally strong run to close out August.”

The pair remains above its daily 5-, 8-, 13-, and 21-EMA envelope, which is starting to align in bullish sequential order. Daily MACD has issued a bullish crossover signal while above its signal line, and daily Slow Stochastics have started to advance through their median line. Having now treated the May through August descending channel resistance as support in recent days, it appears that NZD/JPY rates are gearing up for another at the July high at 78.77. 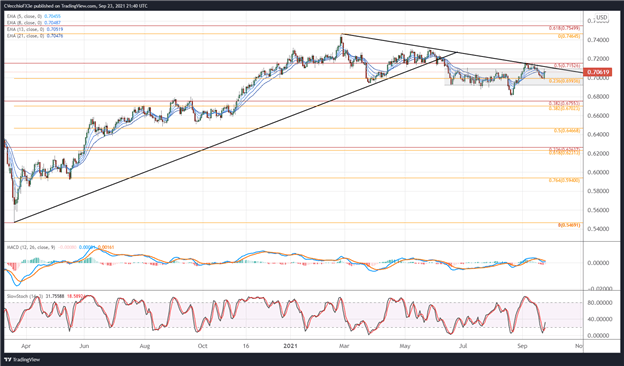 NZD/USD rates are once again positioned to try and break above the descending trendline from the February and May swing highs. The low carved out this week was near the 23.6% Fibonacci retracement of the 2020 low/2021 range at 0.6994, suggesting that a new ‘higher low’ has formed relative to August.

Momentum is becoming bullish again, even though the daily EMA envelope is not yet in bullish sequential order. Daily MACD is on the precipice of a bullish crossover while above its signal line, and daily Slow Stochastics have exited oversold territory with a sense of urgency.

While NZD/JPY rates may have a slightly more bullish setup at present time, NZD/USD rates are likewise postured for another run higher in the short-term. 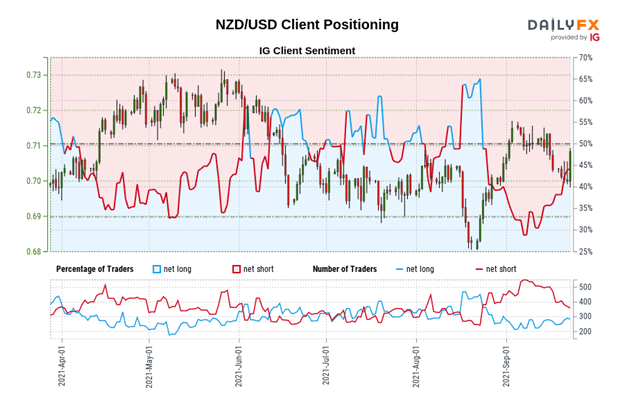 Positioning is more net-short than yesterday but less net-short from last week. The combination of current sentiment and recent changes gives us a further mixed NZD/USD trading bias.