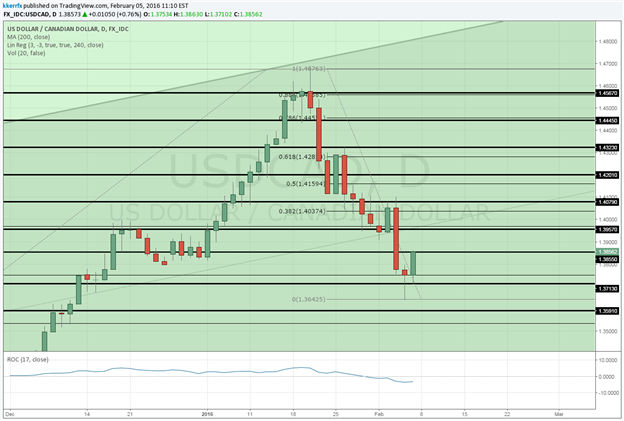 USD/CAD has arguably been the most interesting exchange rate in the G10 space since the start of the year. On the first day of trading in 2016, the pair broke out from a bullish consolidation pattern and never really looked back for about three weeks. On the 20th of January (anniversary date turn window of all-time high in 2002) , Funds tested a convergence of the 78.6% retracement of the 2002 – 2007 decline and the top of the 1-year standard deviation channel in the 1.4650 area and failed. Since then the rate has come under steady pressure and is now actually unchanged on the year at the time of writing.

I last wrote about USD/CAD last week. In that piece I suggested that pair was vulnerable to a deeper decline primarily because of the extreme negative sentiment being exhibited towards the Canadian dollar in several sentiment surveys. A compilation index of these various surveys had actually touched its most negative extreme ever right around the time that USD/CAD peaked which was a huge contrarian sell signal. This “negative irrational exuberance” looks to have been a large driver for the decline over the past week as traders scrambled to unwind positions, but has it run its course? My work with cycles suggests next week will be important for the pair. If this decline over the past few weeks has just been corrective then the latter part of the week would make an ideal time for the broader uptrend to try to reassert itself. Continued weakness in USD/CAD into the week of February 15th, on the other hand, under the 61.8% retracement of the October - January advance around 1.3530would warn that this decline still has a lot more to go. Gann levels between 1.3960 and 1.4090 look pivotal on the upside with a move through the latter needed to refocus attention higher.