The pound extended its losing streak against the USD on Monday while the UK observes the Queen’s state funeral. This may result in less than standard price volatility for GBP crosses during the European trading session. While there are no key economic data prints scheduled for today, the Bank of England (BoE) and Fed eral Reserve will be in focus this week as they announce their interest rate decisions (see economic calendar below).

The BoE is expected to by 60bps at this point leaving the door open for both 50bps and 75bps respectively. An ultra-aggressive Fed may prompt the BoE to go with the latter but should we see a 75bps interest rate hike (78% probability as of this writing), I expect the BoE to maintain a 50bps increment.

Looking at the longer-term picture, the pound is the second worst performing major G10 currency against the dollar this year, second only to the Japanese Yen (see graphic below). The divergence between the U.S. and UK economy has allowed for this trend to continue with U.S. fundamentals showing extreme resilience against a hawkish central bank relative to the UK. The European energy crisis could further add to downside risk for GBP/USD should circumstances deteriorate during the winter months but any positive news would likely result in a flurry of bulls re-entering the market. 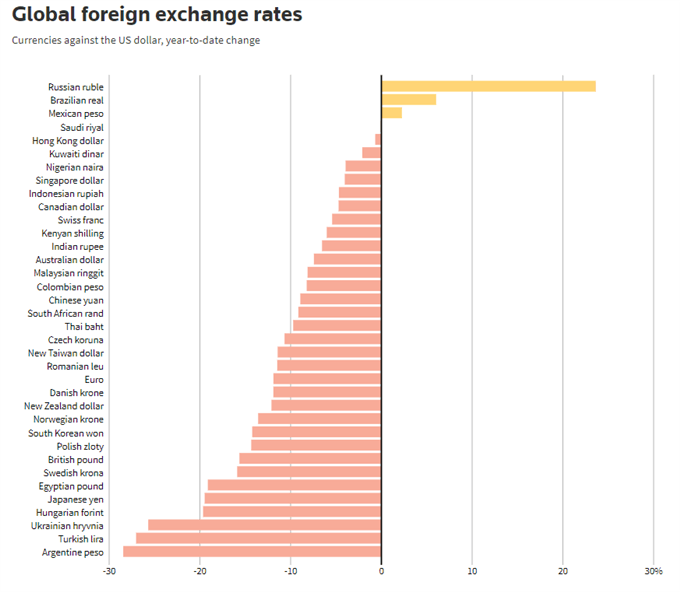 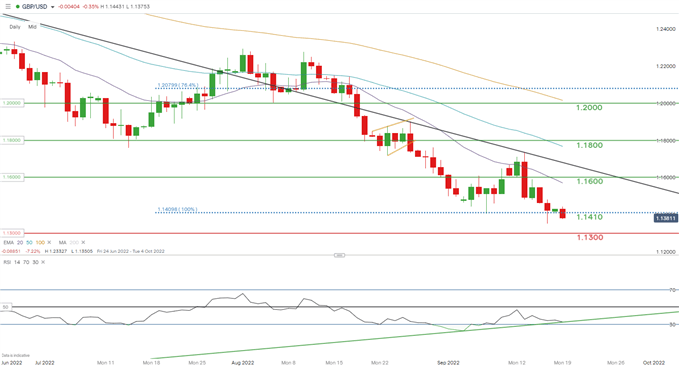 Last week we saw GBP/USD price action break down to 37-year lows which may be approaching once more. Markets are seemingly anticipating the Fed to out-hawk the BoE and justifiably so, in their upcoming rate decisions. The next key level of support comes via the psychological 1.1300 level which may come into consideration should bears pierce below last week’s swing low.

The Relative Strength Index (RSI) and its display of higher lows (slowing bearish momentum) may point to an impending reversal known as bullish divergence. This could develop but with the central bank uncertainty at large, it is difficult to forecast short-term.

IG Client Sentiment Data (IGCS) shows retail traders are currently LONG on GBP/USD, with 80% of traders currently holding long positions (as of this writing). At DailyFX we typically take a contrarian view to crowd sentiment but due to recent changes in long and short positioning, we favor a short-term mixed bias.