The British pound has pulled back quite sharply from last week’s near four-decade low against the US dollar, but remains very short of positives and its long downtrend remains in place.

GBP/USD fell last week towards the $1.14 handle last seen in the distant days before the Plaza Accords of 1985, themselves aimed at reining in a similarly rampant US dollar.

This is a big week for economic data, but that’s only likely to underline the strength of the US’ economy’s position compared to that of the UK, and indeed most of Europe, where inflation remains a huge challenge and war in Ukraine paralyses crucial energy markets.

The pullback seen in many currencies against the dollar in the last few days is likely mere respite before important US inflation numbers due on Tuesday. August’s core inflation rate is expected to come in at 6.1%, above the 5.9% seen in July. Should it do so, the market will likely continue to price in aggressive interest rate rises from the Federal Reserve, to the detriment of the dollar’s rivals, including sterling.

Bank of England Pushes Its Meeting Back a Week

The Bank of England, meanwhile, has postponed its own September interest-rate conclave to the 22nd rather than the 15th, as a mark of respect on the death of the Queen. This means that the decision could come a day after new Chancellor of the Exchequer Kwarsi Kwarteng outlines his fiscal plans, although the national mourning period makes schedules less certain than usual. The government has reaffirmed the Bank of England’s independence but, all the same, it may not want to be seen to tighten monetary policy so soon, which could be yet another factor weighing down sterling.

The UK economy grew by 0.2% in July, according to official data, returning to expansion, if anemically, after a sharp drop in the previous month. However, the three-month averaged growth rate was 0%, for an annualized growth rate of 2.3%.

Markets More Bullish on Sterling, But How Durably?

There may be some respite for the pound if only because of the sheer magnitude of the hammering it has received this year. IG client sentiment data show fully 75% are bullish at these levels, billionaire investor Bill Goss declared himself bullish on the British currency late last week, suggesting that the US dollar is now into overvalued territory and scheduled to lose a little of its haven allure. 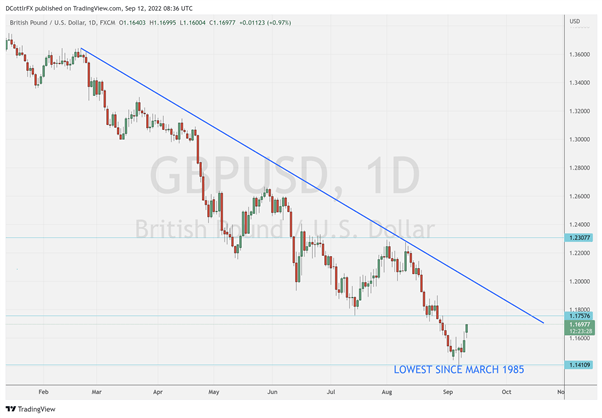 Despite these glimmers of hope, the daily chart shows how much work these self-proclaimed GBP/USD bulls still have to do from a technical perspective if they are to engineer a meaningful reversal. The downtrend from late February remains very much in place, coming in way above current levels at 1.1945. Before that can be convincingly challenged, the pound will need to retake the 1.1742 resistance area where it bounced on July 14 and which the bulls defended for six days in late August.

Should those US inflation numbers leave aggressive Fed rate hikes on the table, we could, rather see sterling revisit the historic lows of last week.