EUR/USD Forecast: Where is the Euro Headed as the Jackson Hole Dust Settles?

The Jackson Hole Economic Symposium delivered what most people envisioned before the event started – the fact that inflation shows no clear signs of slowing which will require continued resolve from the Fed in the form of unabating interest rate hikes.

However, it wasn’t just the Fed that continued the narrative as members of the ECB spoke about the upcoming rate decision with a greater sense of urgency, floating suggestions of 50 or 75 basis points. The 8th of September interest rate meeting marks the potential for a second rate hike as it follows on from the surprise 50 bps in July.

Villeroy, Schnabel, Kazak, Knot and Holzmann all supported a sizeable (for ECB standards) rate hike in September. Even Oli Rehn, one of the ECB’s slightly more dovish members stated it is action time and that the next step form the ECB will be “significant”.

Markets in general are likely to remain dependent on overall sentiment. However, we have seen recently with the notion of the now dead ‘Fed pivot’, that markets can suffer from short-term memory loss. Slightly cooler inflation saw the dollar ease as profit taking ensued, but we have been told all along that the Fed will not budge until there is “compelling evidence” that inflation is slowing – something that was reaffirmed at Jackson Hole.

With the inflation aspect dealt with, we now turn our attention to the jobs data on Friday with the non-farm payrolls. This is where I think markets will attempt to revive the ‘Fed pivot’ if we see job losses pick up. Once again, the Fed remains resolute despite the acknowledgement that the current pace of rate hikes is likely to see job losses and an economic slowdown. Such is the cost of fighting inflation, the greater evil.

The EUR/USD pair advanced in the lead up to Jerome Powell’s address on Friday but almost immediately saw the move pullback after delivering his hawkish message. Today, the pair continued lower during the Asian session but rose towards parity at the start of the London session as the dollar eased off. The up and down movement and the key levels to consider, were highlighted in last week’s preview to the Jackson Hole event and underscores the power of short-lived volatility.

This week, after the dust has settled, we could see a continuation of sideways trading and a relative slowdown in the downtrend. Markets have increased their bets of a potential 75 basis point hike form the ECB next week, from 48% on Friday to 67% earlier today. Higher rate hike odds may support the euro in the lead up to next week’s ECB rate hike. 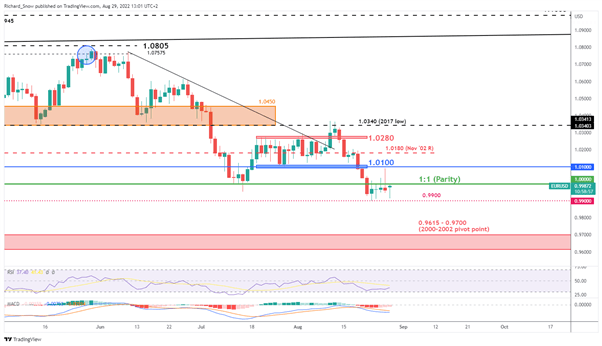 This week picks up where last week ended off, although, the economic calendar only heats up from Wednesday with the all-important US jobs print on Friday. German inflation is expected to rise after last print’s slight reprieve as EU gas prices soar. 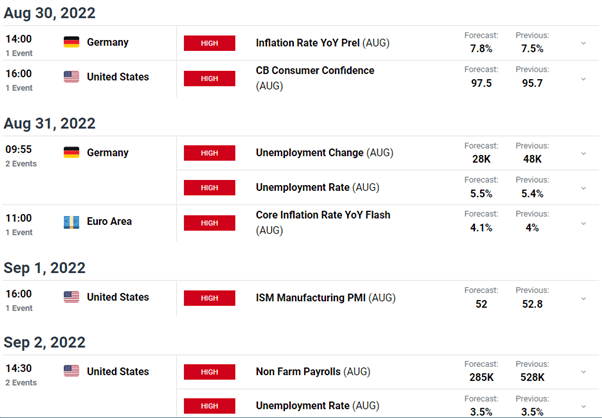