At the start of the week we have seen some risk aversion as German and US equity indices turn lower, continuing the decline from last week. After breaking above the rising pitchfork, the S&P 500 met some stern resistance ahead of the zone of resistance (circled in red) – which includes the descending trendline and the 61.8% Fib retracement of the 2022 move at 4361.50.

After showing signs of bullish exhaustion, equities sold off as prominent members of the Fed (Bullard, Daly, George, Kashkari) reaffirmed their appetite for continued rate hikes. 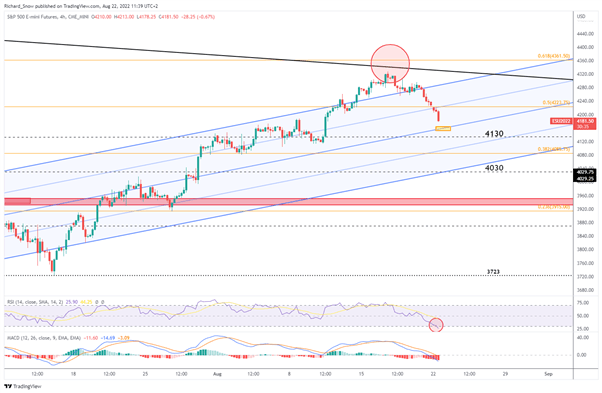 The daily chart shows the magnitude of the move in the E-Mini Futures as the midline of the pitchfork appears as nearest support. Thereafter, 4130 and 4030 appear as support. Resistance remains at the descending trendline followed by the 61.8% Fib retracement at 4361.50.

The MACD indicator suggests that the downside momentum could extend, as the MACD line crossed below the signal line. 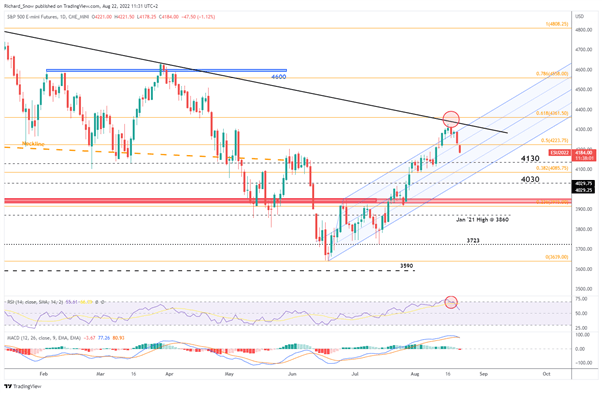 Client sentiment is a contrarian indicator, unless the market has turned, in which case it happens to be correct. That is because client sentiment usually builds up in the opposite direction to the trend so when the pullback or reversal eventually appears, the majority of traders are in the right direction. 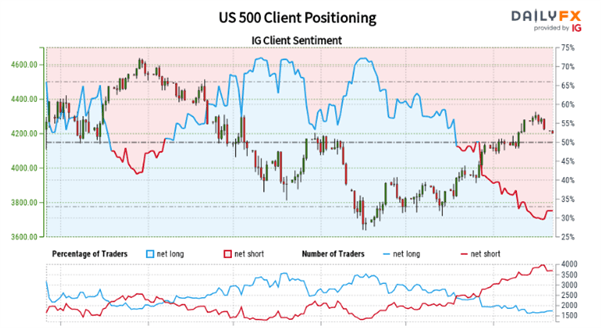 Positioning is less net-short than yesterday but more net-short from last week. The combination of current sentiment and recent changes gives us a further mixed US 500 outlook.

The economic calendar appears rather light in the start of the week which could support the recent directional move lower. The bulk of scheduled risk appears towards the end of the week with the start of the Jackson Hole Economic Symposium on Thursday, while Jerome Powell speaks on the Friday.

Before the week is done, we have Michigan Consumer Sentiment which has recovered from near 50 levels. However, PCE inflation data is likely to attract the most attention on the back of a cooler than expected CPI print earlier this month. A cooler PCE print could result in a slightly softer dollar – which may halt the recent decline in US indices. The Fed tends not to focus on CPI but rather PCE and therefore, it is likely to carry a lot of weight as we round off the week.