The outlook for the Australian Dollar remains mixed as regional catalysts and sentiment clash with macro concerns over growth. Recent weakness in Chinese economic data has weighed on the Aussie despite upbeat risk sentiment during the summer months. A relatively softer tone to risk assets this week has seen the Australian Dollar come off the boil, but downside may be limited. The potential for peak inflation has caught the interest of many following last week’s US CPI and PPI prints, upside appreciation may continue if PCE also comes in softer later this month. But as Chinese weakness continues to weigh on commodities, AUD may continue to struggle and recent gyrations may persist.

AUDUSD has pulled back from recent swing highs above 0.7100 after breaking lower out of a symmetrical triangle pattern. Price has since fallen to support at 0.7000, a massive psychological level for the pair. AUDUSD had put in a massive shift in late July, rallying over 450 pips off the fresh yearly lows. With both the RBA and Federal Reserve on warpaths toward tighter monetary policy, it may be that near-term direction is determined by a mix of risk sentiment and economic data. Tuesday saw dismal US housing data cross the wires, further stoking fears of a slowdown. Traders were also unmoved by the release of the RBA minutes. 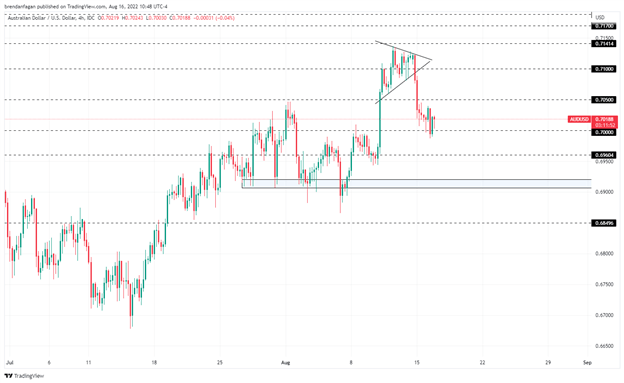 AUDJPY has largely been trading sideways for much of the last few months following the long awaited topside break from the low 80s. Changes in sentiment and persistent Yen weakness have only been able to bounce the pair between the 92 and 96 area for the last few months. While interest rate differentials have supported the Aussie here, the Yen has caught bids recently as investors continue to question the nature of global growth.

Should these fears grow as Europe and China both struggle, AUDJPY could look to explore the lower end of its range below 92.00. This move lower may be exacerbated if peak inflation is in fact here, meaning central banks can lighten up on their tightening regimes. Currently the pair remains supported by the 100-day moving average, but has so far found resistance at 94.50. Upside beyond that area remains limited, as 95.20-96.00 has largely capped bullish trends. 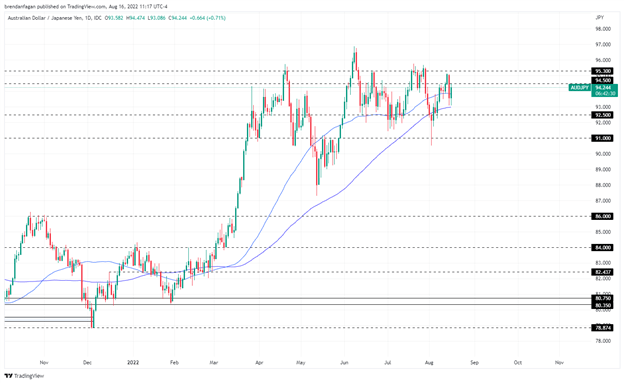 Despite catching a bid during the last few sessions following the weak Chinese economic data, EURAUD remains postured within a severe downtrend. The Euro has been crushed of late as the European Central Bank has embarked on it’s first tightening cycle in a decade with the continent facing a recession.

While European policymakers have not been as blunt as their British counterparts, recession may be imminent as the Eurozone struggles to control energy costs. German and French energy costs have soared as a record warm summer has worsened the ongoing crisis. Drought has seen the Rhine River fall to dangerously low levels, limiting the ability to rely on hydropower while also exacerbating supply chain disruptions as barges struggle to traverse the river.

With this plethora of headwinds surrounding the continent, it is hard to make a bullish case for the Euro. Additional rate hikes from the ECB may be currency-negative, as they may further restrict economic activity in the region. That being said, EURAUD may soon make a visit back to the yearly low below 1.44. The pair has already broken through a major support zone between 1.45 and 1.46, which has now turned into resistance. A failure here coupled with continued weakness from the Eurozone could usher in fresh yearly lows in the near-term. 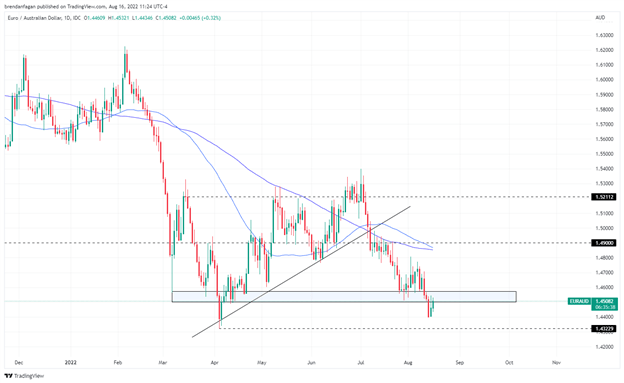