The Japanese Yen appears to have made a serious pivot as a myriad of factors have allowed for the US Dollar to cool its recent advance. Global recession fears and the market’s attempt(s) to price a Fed pivot have pushed the Greenback lower of late, allowing for a bid into risk assets. Despite the Bank of Japan’s continued dovish stance, yield compression globally has made the Yen more attractive. If yields truly have topped, those who have milked the carry trade for much of the last two years may look to make an “Irish exit” if they haven’t done so already. A rush to close Yen shorts could result in a true squeeze lower in many Yen crosses, with many already significantly off of YTD highs.

Last week, the Bank of Japan (BoJ) released its Summary of Opinions which reiterated the bank’s easy stance on monetary policy. The report revealed that the BoJ would “not hesitate to take additional easing measures as necessary.” Policymakers also stated that it is natural to continue easing as inflation is yet to exceed 2% “in a stable manner.” Despite the dovish stance from the BoJ, the Yen may outperform as trends shift into H2 2022. 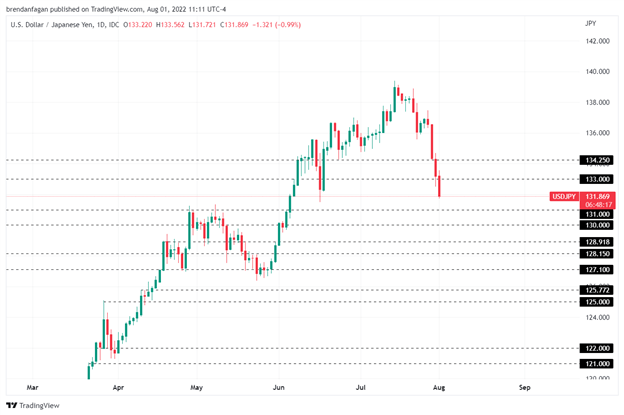 USDJPY has continued to flush lower following last week’s FOMC meeting. Markets have effectively perceived the July meeting as dovish, given that Chair Powell indicated the Fed was now at neutral, and may need to slow rate hikes in the future as the Fed assesses the impact of tighter monetary policy. Since then, markets have priced in just under 100 bps of tightening into year end, which has dragged the US Dollar lower. Dollar weakness has seen USDJPY sink from the 139 area down to below 132, with more pain likely ahead. If the US yield curve continues to come in on weaker data and recession fears, USDJPY could look to trade back below 130. 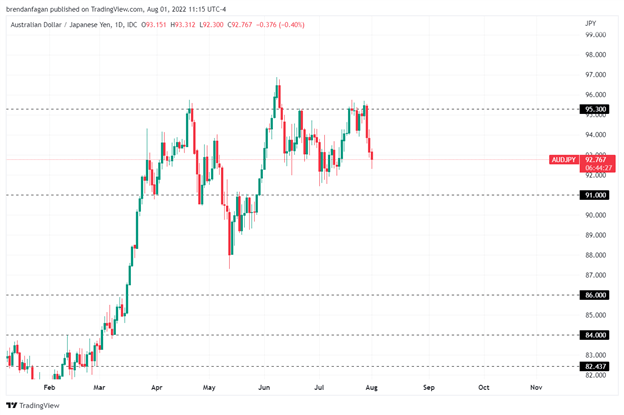 The pullback in AUDJPY has been less pronounced, as the Reserve Bank of Australia (RBA) remains committed to its tightening program. Having failed to crack resistance and make a sustained break above the 95.30 area, AUDJPY has since traded lower on recent Yen outperformance. This decline may be put to the test this week as the RBA looks set to hike by 0.50% at their August policy meeting. If the Yen can take the RBA hike in stride and continue lower, support around 91.00 may represent the next inflection point for the pair. 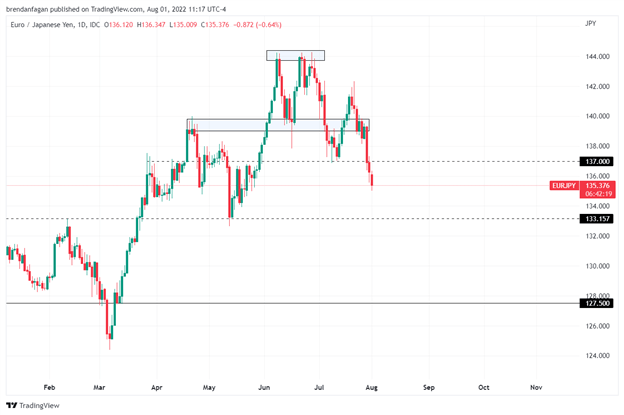 EUR/JPY remains under significant pressure as the outlook for the Eurozone remains extremely clouded. Persistent inflation, the looming threat of an energy crisis, as well as a central bank embarking on a tightening path all represent significant headwinds for the Euro. While EURUSD has strengthened on a weakening Greenback, EURJPY continues to plunge lower, well off YTD highs above 144. Having broken clean through support at 137, EURJPY may continue to slide into support around 133.15. It would appear that the significant challenges facing Eurozone residents and policymakers are set to linger into the autumn and winter months, which may continue to weigh on the currency. With that in mind, traders may look to sell this pair into any strength. 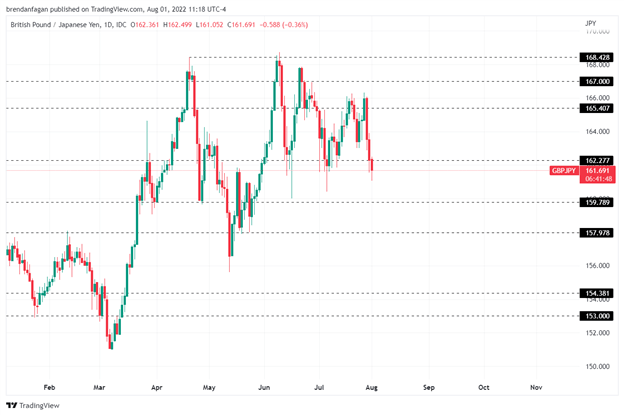 Just like AUDJPY, GBPJPY is another cross that faces the test of a central bank meeting this week. The Bank of England (BoE) is set to meet on Thursday, with markets looking for a “cautious” 50 basis point rate hike. The cross has fallen just slightly over the last few sessions, as GBP strength has surprised of late. BoE Governor Andrew Bailey indicated that 50 bps is in play for the August meeting, and economic data has been stronger-than-expected despite a weak outlook. If the BoE does indeed go 50 bps on Thursday and is perceived as hawkish, GBPJPY could look to avert the recent slide and may target resistance around 166. Over the last few months, dips into the 161-162 zone have been bought. With a major risk event on the calendar this week, history may be set to repeat itself.