Risks Mount in Defining Week for the Euro

This week Thursday we have the European Central Bank (ECB) rate decision on hand. The much anticipated 25 basis point hike has been communicated extensively by ECB Governing Council members for many weeks now but there is still a possibility of a 50 basis point hike, especially if inflation data tomorrow necessitates it.

A significant transport route for Russian gas into Europe is due to complete routine maintenance on Thursday. In recent weeks, the German Economy Minister has raised the alarm surrounding the possibility for spurious excuses out of Russia should normal gas flows fail to return.

A cut in gas or continued sub-optimal flows pose a massive threat to the German economy as it impacts industrial output. Plans are being made for any eventuality. Reports today state that a crucial turbine is being transported to Russia and is expected to arrive on the 24th of July. Preparation work is then expected to take an additional 4 days.

Mario Draghi Motivated to Resign After No Confidence Vote

The political challenges around Mario Draghi’s planned resignation provides a rather unwanted headwind for the euro. The 5- Star Movement, a significant part of the current the current government coalition, decided not to back Mario Draghi in his vote of confidence. The Prime Minister threatened that if the movement didn’t back him, he would resign – something he has already tendered without the approval of the president.

The matter is due to be discussed in parliament on Wednesday and remains a headache for the euro as long as it remains unresolved. This morning, we witnessed a spike higher in the BTP/BUND spread which is typically used when evaluating the health/stability of the complex EU bond market. A blowout on this spread results in higher borrowing costs for the more indebted nation, in this case Italy, which can have a contagion effect for other debt laden nations (Portugal, Greece and Spain). Such a scenario could make hiking interest rates more challenging for the eurozone. 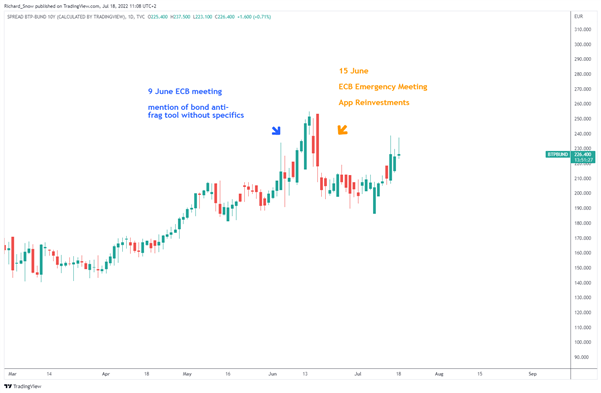 EU inflation data is due before the much-anticipated ECB rate decision on Thursday. Inflation data in major economies has had a tendency to surprise to the upside. The ECB press conference will once more outshadow the actual rate decision, unless we see anything other then the 25 bps.

EUR/USD: Levels to Watch This Week

EUR/USD has built on Friday’s gains ahead of the ECB rate decision on Thursday this week. The move appears to be primarily driven by a softer USD as markets ease off on rate hike expectations which arose after the surprise Bank of Canada (BoC) 100 basis point hike earlier this month.

EUR/USD has traded well above 1.0100 in the early trading during the London session with 1.0180 the next level of resistance. Given the fundamental outlook of the EU right now, such a bullish pullback is likely to be short-lived. There are of course scenarios where we could see the euro continue to strengthen: A shock 50 bps hike, which would result in a bullish repricing and a cordial solution to the political impasse in Italy which would act more as a stabilizing influence as opposed to a driver of euro strength.

The RSI prints above the oversold region raising questions about how long we could see higher prices. The MACD could help provide some clarity on this as euro bulls will be eyeing a possible bullish crossover as the MACD line approaches the signal line. 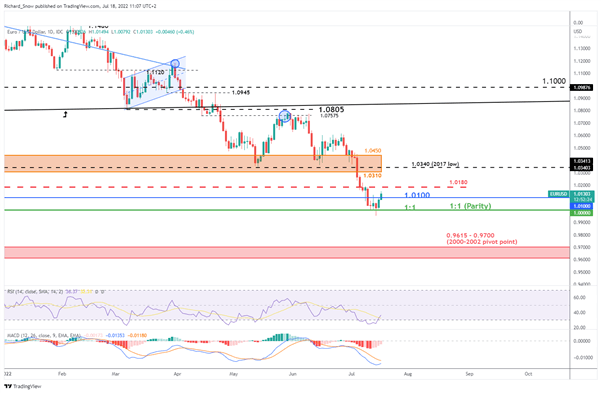