First and foremost, my heartfelt condolences to the family, friends and supporters of Former Japanese PM Shinzo Abe. At the time of writing, it has been confirmed that the Former PM has died after being shot during a campaign speech earlier this morning.

Elsewhere, the focus for traders will be on the upcoming Non-Farm Payrolls report. In light of the employment indicators that we have seen in the lead-up to today’s jobs report, market participants will likely be positioned for a softer report, which will feed into the recent narrative of heightened recession risks. That being said, this does, however, mean that risks are asymmetrically tilted in the event of a strong beat. Therefore, in this scenario, the cleanest expression would be via JPY shorts against the USD or shorting US Treasuries, given that they have been popular hedges against recession risks in the last two weeks. A reminder that Wednesday’s better-than-feared ISM Non-Manufacturing print prompt a modest unwind of these recession hedges, while this would also open the doors for EUR/USD to break parity. On the flip side, a softer than expected print would favour bond bulls and lower Cross-JPY.

EUR/USD Selling Has Been Relentless

Since the Euro broke below multi-year support at 1.0340, selling has been relentless in the pair with little to no bouncebacks for traders to fade. Alongside this, close watchers of the pair may have noticed that Euro selling has picked up notably once London walks in, which to me suggests a more flow-driven move by big investors (not confirmed, more my speculation). 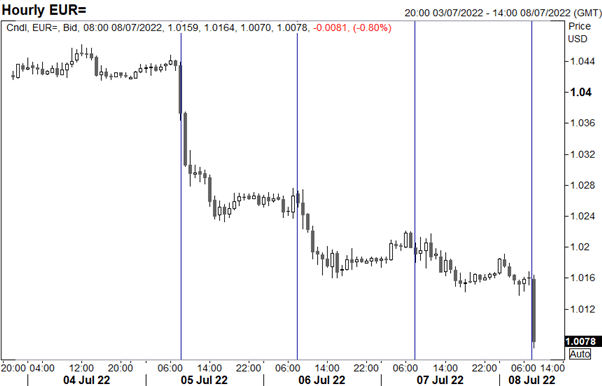 Time To Get Bullish Bitcoin

In recent weeks I have noticed that sentiment in cryptos is very one-sided and if I’m honest, they have a good right to be with Bitcoin down over 60% since its peak. However, as is often the case, sentiment follows the price. For example, you tend to hear someone say “Bitcoin looks ugly” when Bitcoin is trading at the lows (well, obviously), you rarely hear someone say Bitcoin looks weak when it is struggling at recent highs.

As such, after the sell-off we have seen in cryptos, we have seen a Short Bitcoin ETF launched AFTER a circa 60% drawdown, brilliant timing!. While in recent days, said Short Bitcoin ETF has seen exposure explode by 300%. What’s more, investors have reportedly begun taking their Bitcoin off exchanges and stowing them into crypto wallets. 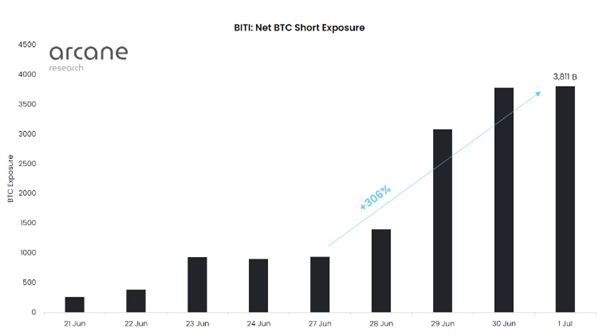 That said, as shown below, landmarks in Bitcoin have also marked turning points for the cryptocurrency. Not to forget that with the correlation between equities and cryptos only strengthing in the past year, the stock market plays an important role for Bitcoin. For me, while I still favour selling rallies in equities, I am more positive on risk sentiment in the next week or two, which of course can change quickly should next week’s CPI show another topside beat vs expectations. However, where sentiment lies with crypto is clear to me, thus given my less bearish view on stocks, I am siding with a short-squeeze in Bitcoin towards 28000. The view is wrong should we break below 17500. 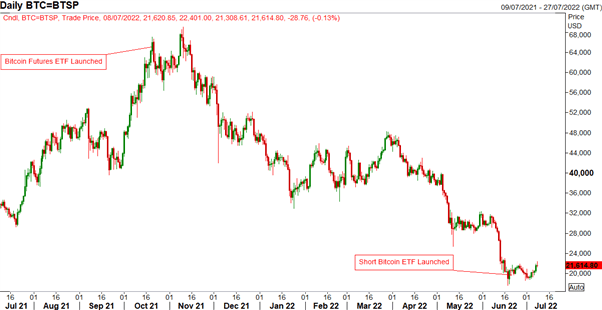