S&P 500 Looks to Extend Recent Gains Ahead of NFPs

The S&P 500 built on recent gains on Thursday, as risk broadly advanced during the New York session. Energy stocks were front of the pack on Thursday, with WTI advancing by more than 5%. Equities pushed higher despite a slight rise in weekly jobless claims, as eyes will now turn to Friday’s nonfarm payrolls (NFP) report for June. Currently, the S&P 500 is working on its fourth consecutive positive session. Despite the upbeat nature of markets during this shortened week, the release of FOMC minutes on Wednesday reaffirmed the Fed’s commitment to higher rates and tighter financial conditions.

Equities gained following the release of the FOMC minutes, as there were no hidden surprises for market participants. The minutes set the table for a rate hike of 50 to 75 basis points, with the market effectively priced for 75 bps. Fed officials indicated that the FOMC could implement a much more restrictive policy stance, should inflation not cool down. As many wonder whether other major central banks will have to reconsider their path(s) toward tighter policy, it appears that the Fed is firmly set on raising rates and cooling demand in the near-term. As long as supply-side issues fail to subside and ease inflationary pressures, the Fed may remain on a warpath for higher short-term rates. 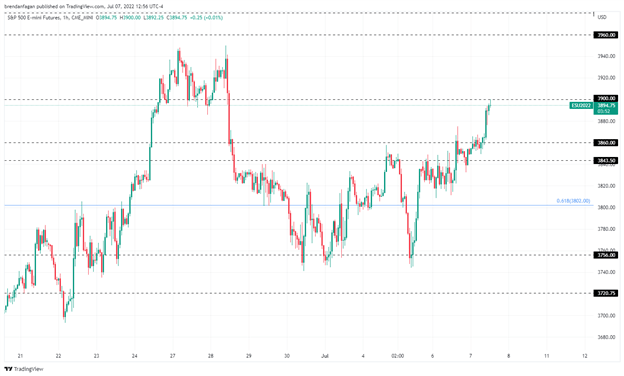 The recent rally in the S&P 500 sees SPX futures (ES) approaching key resistance at 3900. Having found key support in the 3756 area, price has had a swift rebound despite significant risk events on the economic calendar. With NFPs on Friday, equities may be in a make-or-break moment here in terms of the rally.

Traders will want to focus on the price action in US Treasuries, which has been a key driver of broader risk of late. The reprieve in US Treasury yields has benefitted stocks, as lower yields benefit equity valuations. Should the 2-year Treasury yield make significant advances back toward the 3.45% area, ES may struggle to take a look at the 4000 threshold.