The Australian Dollar held overnight gains after the May unemployment rate came in at 3.9% against 3.8% forecasted and 3.9% previously.

Although the headline rate appears as a small miss, digging into the numbers reveals a rosy outlook for the Australian jobs market. The unemployment rate remains at its lowest in 50-years.

The overall change in employment for the month was 60.6k instead of 25.0k anticipated. Full time employment increased a whopping 69.4k, while 8.7k part time jobs were lost in May.

The participation rate jumped up to 66.7% from 66.3% prior and higher than the 66.4% estimated. This explains the slight increase in the unemployment rate even though more jobs were added.

Today’s data reiterates that the RBA has plenty of scope to rein in damaging inflation. RBA Governor Philip Lowe has made it clear, in no uncertain terms, that aggressive rate hikes are coming.

Speaking on the Australian Broadcasting Corporation (ABC) on Tuesday night, he specifically said that when it comes to inflation, the bank will do “whatever it takes.”

Seemingly channelling former ECB President Mario Draghi, except that instead of promoting recklessly loose policy, Mr. Lowe is taking his job seriously as a central banker.

Mr. Lowe said that Australians need to prepare for higher interest rates and that it is reasonable to assume that the cash could get to 2.5% by the end of the year, the mid-point of the mandated 2-3% target band. He said that inflation could hit 7% later this year.

Yesterday, the Australian government announced that the minimum wage will rise by 5.2%, 0.1% above the latest inflation print of 5.1%. It is welcome news for minimum wage workers, but it is a headache for monetary policy managers trying to stare down inflation.

So, with wages rising, Mr. Lowe’s messaging is understandable. When it comes to the previously loose stance, he justified the hawkish outlook by recognising that the emergency is over and it’s time to remove the emergency policy settings.

His commentary saw AUD/USD make some gains, but it was the reaction to the Federal Open Market Committee (FOMC) meeting 8-hours earlier than today's data that lit up Aussie bulls while the US Dollar sank. 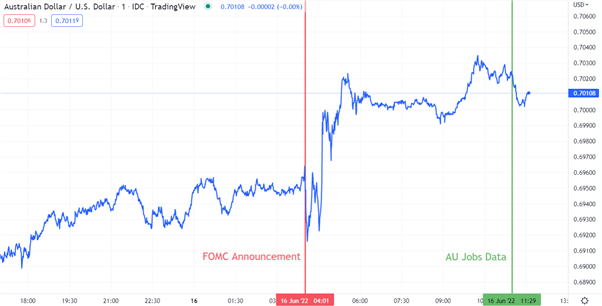 The Fed raised rates by 75 basis-points as most had expected. It was the language of Fed Chair Jerome Powell that appeared to be less hawkish looking forward than the market had been looking for.

He said that the next meeting in July is likely to see a debate for a 50 or 75 basis point increase. With the latest inflation read at an ‘eye watering’ 8.6% year-on year, his stance disappointed Treasury markets with yields dipping across the curve, which undermined USD.

This picture has an RBA becoming more hawkish at a time when the Fed has stepped back from being too much that way. AUD/USD may find support once the market digests the strength of the jobs market.