GBP/USD called back some of yesterday’s downside in the Asian and European sessions after the dollar took its foot off the pedal as U.S. Treasury yields eased.

Currently, the UK economy is under pressure from rampant inflation and slowing manufacturing performance. Despite the uptick in yesterdays housing prices, it is likely that this will inevitably slow as the cost of living weighs on consumers. On the other hand, the U.S. economy is flexing its muscle and reinforcing its robustness in the current global climate via improved manufacturing data.

Tomorrow’s Non-Farm Payroll (NFP) print could underpin this narrative and favor the dollar in the short/medium-term while the ADP and jobless claims will serve as a foundation to tomorrows announcement. Spillover effects from the eurozone (Russia/Ukraine) have compounded the situation leaving the U.S. in a far more favorable light than the United Kingdom.

The table below is interesting in that if we compare the December 2022 implied BP figure from mid-May, money markets have added an extra +/-30bps to give the current 141.73bps total. I think this could be a case of overexuberance and could weigh negatively on sterling going forward. 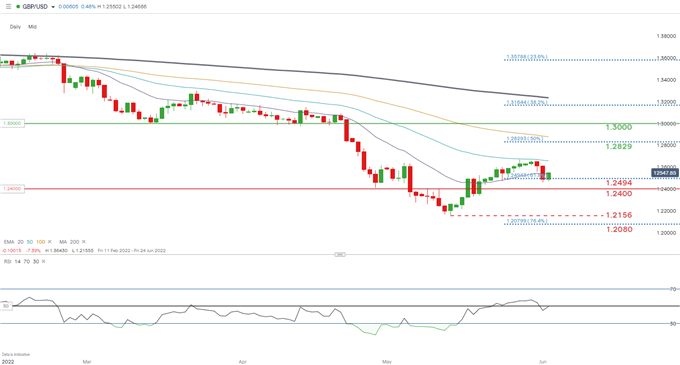 After finding support at the 61.8% Fibonacci level at 1.2494, GBP/USD price action now flirts with the 20-day EMA (purple). The Relative Strength Index (RSI) reads at the 50 level which is indicative of indecision in terms of upside or downside bias. My forecast remains toward the downside from a fundamental perspective (current) which leads to believe that support at 1.2400 and beyond are around the corner.

IG Client Sentiment Data (IGCS) shows retail traders are currently LONG on GBP/USD, with 67% of traders currently holding long positions (as of this writing). At DailyFX we typically take a contrarian view to crowd sentiment resulting in a downside disposition.