USD/JPY Treads Water Ahead of Bank of Japan Policy Decision

The Bank of Japan’s monetary policy meeting this week will set out the central bank’s plans to tackle lowly inflation and weak inflation while at the same time keeping control of the Japanese Yen, especially against a surging US dollar. The central bank is expected to leave the current ultra-loose monetary policy conditions unchanged, while at the same time propping up the Japanese Yen as it closes in on 130 against the US dollar. While Japan continues to cap its 10-year government yield at 0.25%, the 10-year US benchmark bond is offered with a yield of 2.83%. This spread has widened over the last months prompting selling of the low-yielding currency into the higher-yielding greenback as the Fed ready themselves to hike interest rates in the US in 50 basis point clips.

The US dollar is also benefitting from weakness in a range of global currencies with the US dollar basket (DXY) hitting a fresh two-year high earlier today. The basket is a measure of value relative to a basket of six foreign currencies including the Euro (57.6% weighting), the Japanese Yen (13.6%), and the British Pound (11.9%). These three currencies have been and remain weak, boosting the greenback ever higher. The daily chart below shows the US dollar basket has been a one-way trade for many months. 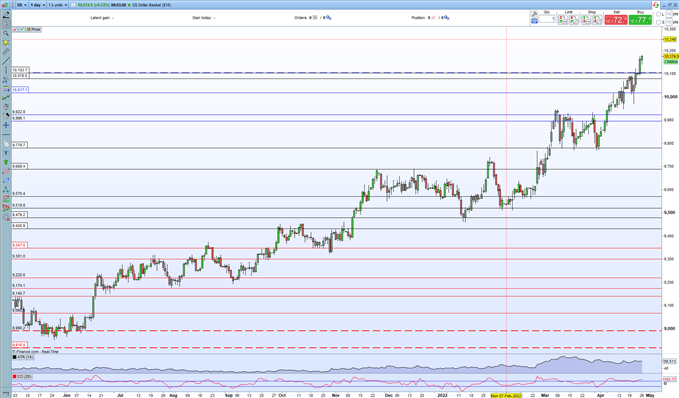 USDJPY broke through 125.00 recently, a level seen over the last few years as a line in the sand for the BoJ and an area where they would defend the Yen. The pair made an attempt at 130, a level that was last seen in April 2002, before turning marginally lower. The 125 level is now likely to become support for the pair. The Bank of Japan will need to be very clear with the markets this week about their preferred level for the Japanese Yen to help prevent further volatile moves. 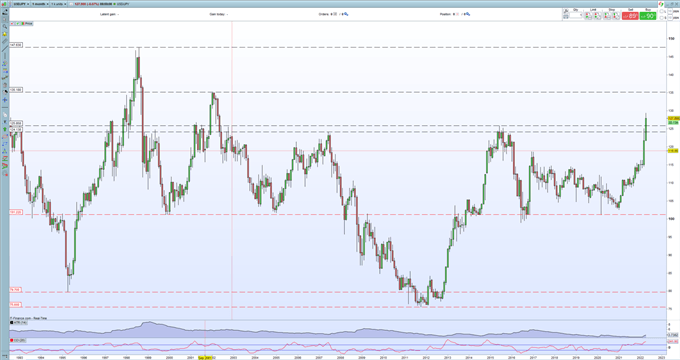 What is your view on the Japanese Yen – bullish or bearish?? You can let us know via the form at the end of this piece or you can contact the author via Twitter @nickcawley1.