Martins Kazaks, Latvia’s central bank governor has expressed that a view to hike 2 to 3 times this year is “quite a reasonable view to take”. He added, “a rate rise in July is possible” but qualified his statement saying that its immaterial whether the first hike is in July or September but prefers July. Kazaks is considered to be one of the slightly hawkish governing council members of the ECB and joins calls by other members to promptly end asset purchases and begin hiking rates in a bid to calm inflation.

Growth Concerns Confirmed by the IMF

The ECB’s ‘gradual’ approach to phasing out its Asset Purchase Programme (APP) coupled with what is likely to be a 50 basis point hike from the Fed next week, places the euro in a tough spot. Not only that, the IMF revised its 2022 euro zone growth projections lower, from 3.9% to 2.8% with Germany accounting for a large share of the weaker outlook.

Germany is the EU’s largest economy which is seen dropping 1.7% in expected, GDP growth in 2022. In contrast, the US is only expected to drop 0.3% from the January GDP growth forecasts, coming in at 3.7% for the year. All figures refer to real GDP (expected nominal GDP – expected inflation)

Learn About the Crucial Role of Central Banks

According to current expectations derived from the Federal funds futures market, the market expects an additional percentage point rise in the Fed funds rate before the ECB could achieve lift-off on July 21st – the date that is being eyed for the ECB’s first rate hike in years.

It seems like we have been looking at the same chart for ages and that’s because we have. The euro’s decline has been well telegraphed meaning all that was left was to watch EUR/USD hit multiple technical levels on the way down. At present, the 1.0635 2020 low is well within reach and is the nearest significant level of support. The monthly chart is needed to hone in on the next level of support for EUR/USD (below). In the down trending market, broken support naturally turns into resistance and current resistance comes in at 1.0758. 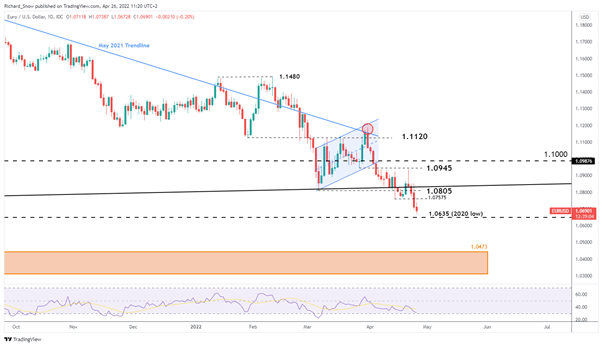 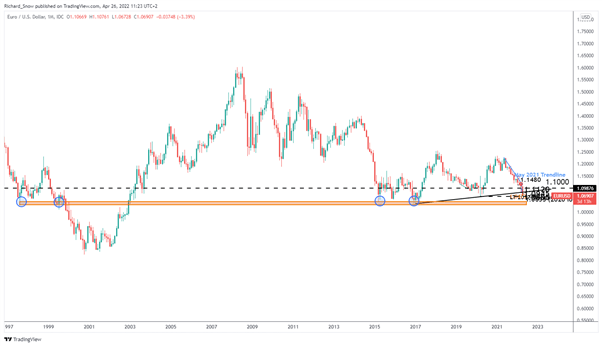 Major Risk Events in the Week Ahead

On Thursday the advance GPD figure for the US is due, already showing a much lower expectation compared to the previous figure.

We then see both EU and US inflation data which isn’t anticipated to change the current narrative if we see prints in line or exceeding expectations, however, we could see a temporary drop in the dollar basket (DXY) should US inflation figures come well below expectations due to the fact that markets have priced in aggressively higher rate hikes throughout the rest of the year. Therefore, a downward surprise could result in a repricing of the dollar as markets taper rate hike expectations.

Then the big one, the FOMC rate setting meeting, takes place next Thursday on May the 4th.