The Bank of Japan (BoJ) and the Reserve Bank of Australia (RBA) have earned the reputation as two of the most dovish central banks among the major central banks. However, the minutes relating to the RBA’s 5th of April meeting, referenced inflationary and wage growth concerns which “brings forward rate timing”.

As a result, this highlights a potential rate hike in June, in line with previous economist projections as the Bank looks to hike rates for the first time since 2010. The board will have the benefit of digesting crucial inflation data for March (April 27th) and wage growth data for the same month (May 18th) ahead of the June meeting.

Economic events relating to Japan, Australia and the US are rather light this week with US durable goods and consumer confidence data due next Tuesday. Thursday we find out what inflation in Japan during March will look like. Japan imports around 70% of its energy needs and was particularly hard hit as the yen depreciated while the dollar price of oil rose drastically – look out for a potential upward surprise.

Taking a look at AUD/JPY, price action has breached above the zone of support around 90.50 (blue rectangle) after successive positive weeks. The RSI reveals overbought conditions which presents the first clue that the pair’s momentum could start to fade. Keep in mind that markets can remain overbought and oversold for extended periods of time so it will be crucial to monitor when the reading dips back below 70. 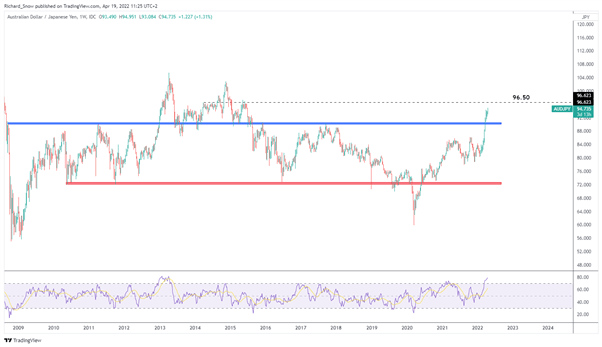 The daily chart highlights the recent rise on the back of the RBA minutes with 96.50 as the nearest level of resistance. The daily chart also reveals overbought conditions, which could persist for some time as monetary policy divergence between the RBA and BoJ continues. 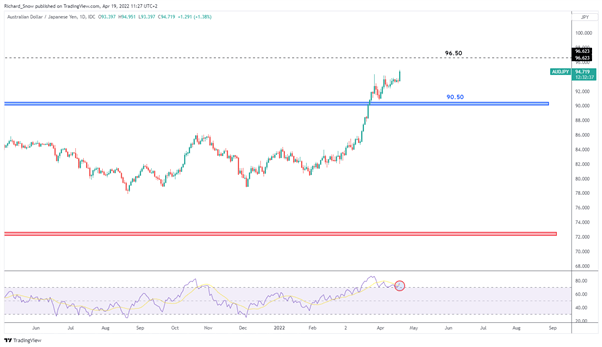 The yen remains weak after various BoJ officials underscored the positives of yen weakness, mainly that it boots local firms’ profitability when repatriating foreign earnings. However, the Japanese finance minister explained that, “damage to the economy from a weakening yen at present is greater than the benefits accruing to it”, in one of the most explicit warnings issued yet. The downsides of yen weakness is that it reduces household spending power as a greater portion of household incomes will be spent via higher fuel and food costs.

The daily USD/JPY chart shows the pair having surpassed the 128.10 mark, heading towards 130.00 – largely considered as the line in the sand for yen depreciation. As such, 130.00 represents a rather significant level of resistance. Support appears all the way down at 125.00. 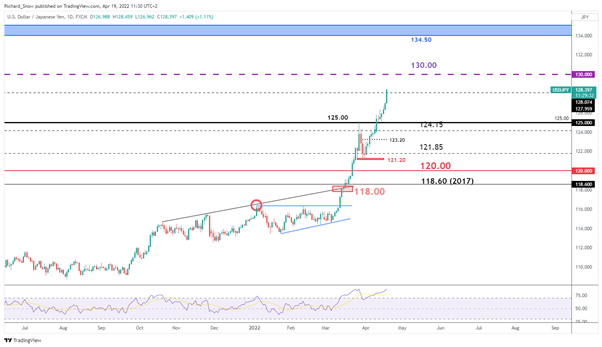