Most Read: Rising Rates and Volatility are Features, Not Bugs

The Nasdaq 100 maintained sharp daily losses after the Fed released the minutes from its March gathering, when policymakers began the interest rate liftoff and announced progress on a plan to reduce its securities holdings, which ballooned to nearly $9 billion during the pandemic.

According to the account of the two-day session, policymakers are increasingly concerned about inflation and are beginning to favor stronger and more forceful measures to counter soaringconsumer prices. In fact, many members indicated one or more 50 basis points rate increases could be appropriate in the future to restore price stability. This sentiment to go “go big” basically seals the case for a half a percentage adjustment at the May conclave.

The readout of the last meeting also offered valuable insight into the ongoing deliberations to begin decreasing the size of the balance sheet - a process known as quantitative tightening (QT). The record revealed that all participants agreed that asset reductions could commence at a coming meeting and that the scheme would need to be executed at a faster pace than the previous wind-down to take into account different economic and financial conditions.

On the balance sheet normalization mechanics, policymakers noted that QT will be carried out primarily by decreasing reinvestments of the principal payments received from maturing securities held in SOMA. However, many participants indicated that direct sales of MBS may be needed at some point after the runoff was well under way to help meet the goal of a portfolio made up mostly of Treasuries in the long run.

While details may change when the official announcement is made, central bankers appear inclined to support an approach that involves rolling off $95 billion of maturing securities ($60 billion for Treasuries and $35 billion for MBS), phased in over a period of three months or modestly longer. This is a much more aggressive framework than seen in the 2017-2019 cycle when the Fed began with monthly caps of $6 billion Treasuries and $4 billion mortgage-backed securities, increasing it over the course of a year to $30 billion and $20 billion respectively.

The Nasdaq 100 held on to losses after the minutes crossed the wires as traders were already prepared for a hawkish event after Fed governor Lael Brainard endorsed yesterday a more aggressive roadmap for balance sheet normalization, with significantly larger limits on runoffs and a much shorter period to phase in the maximum caps compared to the previous QT. 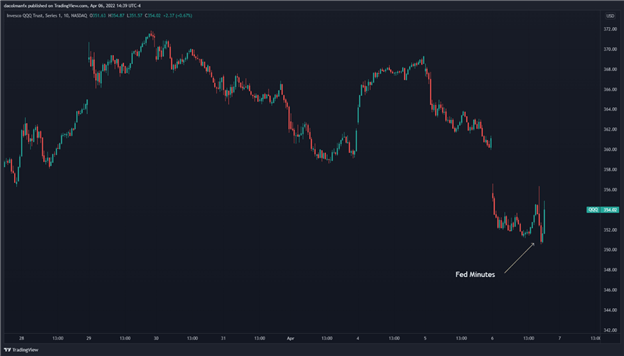 The Fed's tightening cycle will drain liquidity from the system and tighten financial conditions in the coming months, reinforcing the upswing in Treasury yields. Fading monetary stimulus will exacerbate volatility and create a somewhat hostile environment for the equity market, with growth and technology stocks being the most vulnerable given their high valuations.