This morning’s comments by the Bank of Japan Governor regarding the weak yen have been viewed by some as an attempt to soften the Bank’s previous stance which was in favor of steady yen weakness. The benefits of a weaker yen result in increased corporate profits when repatriating foreign earnings but the downfalls impact household incomes and firm that are heavily import reliant. However, the Governor expressed concern that, “recent (yen) moves have been somewhat rapid”.

Kuroda reiterated that, “It's extremely important for currency rates to move stably reflecting economic and financial fundamentals," and reiterated that benefits of the weak yen. He added, "We will patiently maintain powerful monetary easing to support an economy still in the midst of recovering from the COVID-19 pandemic's impact”.

Household Spending Increases for Second Month in a Row

Japanese household spending rose 1.1% for February (YoY) and is the second positive month despite a big miss on the 2.7% forecasted figure. The effects of the weaker yen and the price pressures resulting from the Russia-Ukraine conflict are likely to show up in the March data, potentially adding pressure on the BoJ to defend the yen.

Main Risk Events over the Next 7 Days

US and Japanese scheduled risk events are rather light over the next 7 days. The FOMC meeting minutes from March are due tomorrow however, such revelations are unlikely to paint a different picture to the one we now have: The Fed in unity and fully committed to lowering inflation (hawkish). While inflation continues to trend higher, the March inflation figures will be particularly interesting as the price increases associated with the Ukraine invasion will start to be picked up in the March prints.

Since rebounding off the 121.20 level, the USD/JPY pair has risen relatively slowly. Printing two days of price action showing extended lower wicks may signal a reluctance to lower prices and a continuation of Yen weakness towards 124.15 and possibly even 125.00. However, the slow down in bullish intent means that a break above 123.20 ought to be seen as the nearest resistance for bullish continuation and momentum, opening the door to a potential range should prices turn ahead of 123.20. 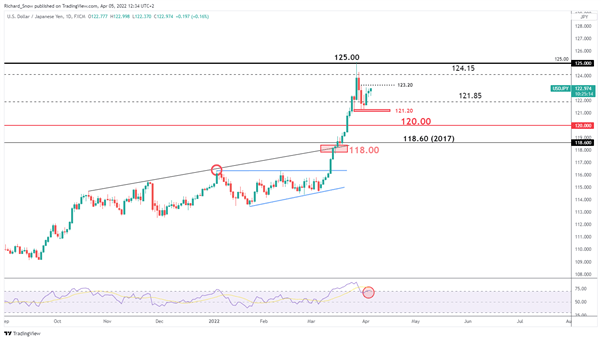 In addition, the Bank of Japan (BoJ) seems to be lowering longer-dated borrowing costs via their commitment to unlimited 10-year JGB purchases, which has seen a more stable Yen vs the greenback in recent days. The effectiveness of the BoJ’s ‘yield curve control’ is yet to be confirmed despite yields moving lower and that is because the yield is currently closer to the cap than the target rate of zero. 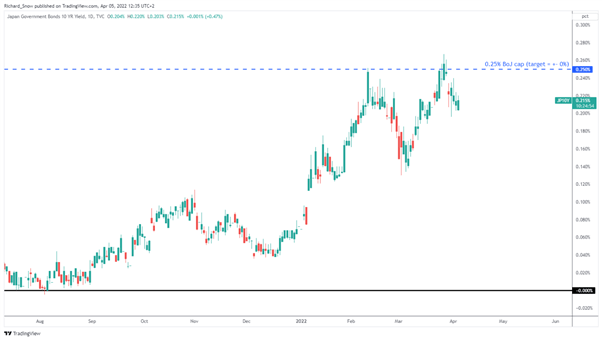