Australian Dollar Skips a Beat on Softer China CPI and PPI. Where to for AUD/USD?

The Australian Dollar tried to nudge higher as Chinese CPI came in at 1.5% year-over-year to the end of December against forecasts of 1.7%, dipping from and 2.3% previously. PPI printed at 10.3% instead of 11.3% anticipated and 12.9% in November.

This is seen as a good result for the Chinese economy, particularly the lower PPI number as it may indicate a peak in input costs for producers.

However, prices paid at the factory gate are still far outstripping prices paid at the cash registers. Businesses are left with a conundrum as they grapple to either pass on the increase in costs to consumers or absorb a lower profit margin.

Today’s inflation figures come at a time when the Peoples Bank of China (PBOC) had been under pressure to ease monetary policy. This could give them some breathing space, but some smouldering growth impediments are lingering.

The impact of the Omicron variant of Covid-19 in economic activity is exasperated by China’s zero case policy. Additionally, the Chinese property sector is facing a credit crunch after a record number of defaults in the industry last year. A number of Chinese property companies face large debt repayments due this week.

While the reserve ratio requirement (RRR) was cut in December, it appears more easing might be required.

There has been growing speculation from commentators on the possibility of the PBOC cutting the medium-term loan (MTL) rate. It was last cut at the outset of the pandemic but has remained unchanged since.

AUD/USD has come under pressure from rising US yields to start 2022. With today’s encouraging numbers from China the picture might be changing.

Energy commodities and iron ore, Australia’s largest export, have seen price recoveries of late. If the PBOC were to loosen policy, these tailwinds might be supportive of a higher Australian Dollar.

Looking ahead, China will release data on money supply (M2) and trade this week before industrial production figures on Monday next week. 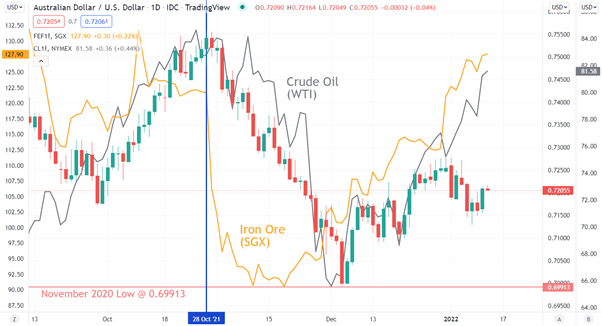