Actual and revised data for U.S. consumer confidence came in lower than estimates (see economic calendar below). Hesitancy around virus concerns could be weighing down on confidence in the U.S.. Initial dollar reactions were muted as I believe more focus is being placed on Fed Chair Powell’s testimony running concurrent to the data release (more details below).

DOVISH RE-PRICING IS THE NAME OF THE GAME!

The U.S. Dollar Index (DXY) opened trading significantly lower today as Omicron fears re-emerged, carrying safe-haven currencies like the Japanese Yen (JPY) and Swiss Franc (CHF). A statement from the Moderna CEO rippled through markets after mentioning the likely need for new vaccines although evidence for this is hearsay at this time.

U.S. Treasury yields have dropped testing November lows, while concerns around the effect of the virus on economic growth have priced out a June 2022 rate hike.

Markets now favor a later start and aim for September 2022 (see table below) to begin hiking. This is the start of what seems like ‘dovish re-pricing’ and could hurt dollar bulls should the trend continue. Clarity around the new strain will allow for markets to focus on the economic data without virus contamination. 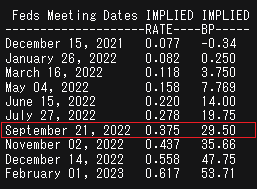 Recent talk about increasing the rate of asset purchases (taper) could be placed on the back burner for now while more data is needed around the new variant.

The current risk-off market sentiment could see the DXY falling short-term until virus doubts subside. Lower yielding currencies including CHF, EUR and JPY are unlikely to depreciate further against the USD as the dollar was by far the most hawkish of the group until now. These three low yielding currencies make up much of the DXY which is why I do not foresee any bullish upside but rather consolidatory/downside price action. This being said, positive Omicron news could resume the dollar uptick as fundamentals remain supportive (strong economic growth and elevated inflation).

The week ahead includes several high impact events including PMI and NFP prints. Positive releases could add further pressure and complexity to the Fed’s outlook. Data misses may allow for the Fed to justify a more patient approach in the midst of virus uncertainty and support further dovish revisions. 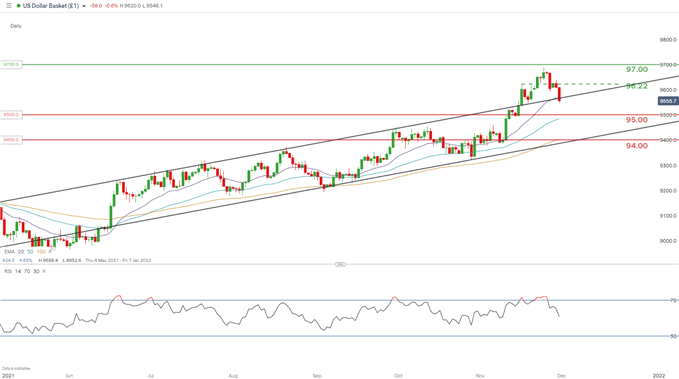 DXY is now testing the medium-term channel resistance zone (black), coinciding with the 20-day EMA (purple). Initial reaction to consumer confidence data has been relatively subdued as mentioned above but keep an eye on Fed Chair Powell’s testimony for clarity around the Fed’s outlook. A daily candle close below channel resistance could bring subsequent support levels into consideration.