The coalition agreement announced in Germany this week has ushered in a new Government of center-left Social Democrats, Greens and free-market Liberals, dedicated to social liberalism and the tackling of environmental issues. Inevitably, that means higher spending on industry and tackling climate change, which together will loosen the tight fiscal stance espoused by Angela Merkel’s center-right Christian Democrats in power for the past 16 years.

Elsewhere, that might be expected to set alarm bells ringing at the central bank, where there would be talk of tightening monetary policy to offset the easing of fiscal policy. Not, though, in the Eurozone, even though Germany is the area’s largest economy. In fact, the European Central Bank has made so clear its determination not to raise interest rates that the result will likely be a still weaker Euro despite Germany’s constitutional borrowing limits and a promise not to raise overall taxes.

Like Governments everywhere, the new one in Germany will no doubt find a way round the rules. 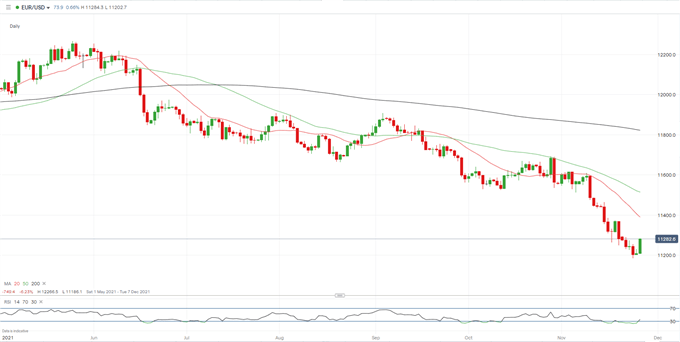 As the chart above shows, EUR/USD is already at its weakest since June 2020, and today’s slight bounce is certainly overdue: see the oversold signal from the relative strength index, under the main chart, that is around the 30 level. However, longer-term, it remains hard to imagine the Euro recovering as the spread of Covid-19 through Continental Europe continues.

This week, third-quarter data showed that GDP in Germany was up just 1.7% quarter/quarter, rather than the 1.8% estimated previously, and consumer confidence figures showed a larger-than-expected drop. This economic weakness can only be made worse by the latest surge in coronavirus infections and hospitalizations that has prompted lockdowns and other measures that have been met by protests and even rioting.

Against this background, inflation data from Germany Monday and the Eurozone as a whole Tuesday would normally be highly significant. However, the Bundesbank has already warned of a spike close to 6% and, like the ECB President Christine Lagarde, it sees inflation falling thereafter. The numbers will therefore not be a shock, will not affect ECB policy and should not impact the Euro longer-term however bad they are.