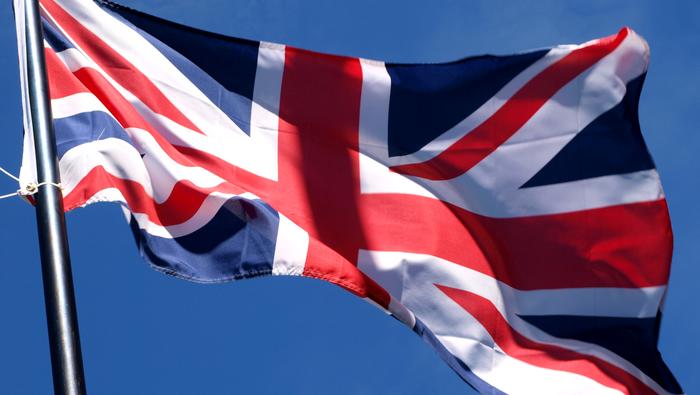 Ireland Prime Minister Micheál Martin, shed some light on recent EU-UK negotiations around the Northern Ireland Protocol, stating that the “mood music” has improved in recent weeks. While admitting that there have been periods of very little progress, there is now “a bit of engagement, of serious intent”.

The EU Commission Vice-President Maros Šefčovič reiterated that the post-Brexit trade deal and the settling the Northern Ireland Protocol is crucial as, “one cannot exist without the other”.

Lord Frost, negotiating on behalf of the UK, noted that there are still “significant gaps” but remains optimistic towards making progress. Mr Šefčovič shares the same sentiment towards making progress and recognized what he described as a “change in tone” from UK negotiators and remains hopeful that a solution could “become reality if the UK plays its part”.

Rates markets seem to have learned not to anticipate a possible rate hike from the Bank of England (BoE) after last months November 4th meeting resulted in a decision against a rate hike despite one being priced in by the market.

At the time of writing, according to overnight interest rate swaps data, there is a 50/50 chance that the BoE will issue a 25 basis point hike. That also means there is a 50% chance that rates will remain unchanged. Such uncertainty will do little to bolster the Pound in the lead up to the December meeting in the absence of speeches by officials regarding inflation or interest rates.

Implied Probability of 0.25% rate Hike at the December Meeting

On Friday, newswires received word of a renewed lockdown in Austria in response to an increase in Covid cases with the possibility of Germany following suite. This saw a late bid on the greenback before gently easing back towards the opening level. GBP/USD dropped sharply, almost erasing the week’s gains before trading well above the daily low. USD strength continues to dictate movement in the pair for now. 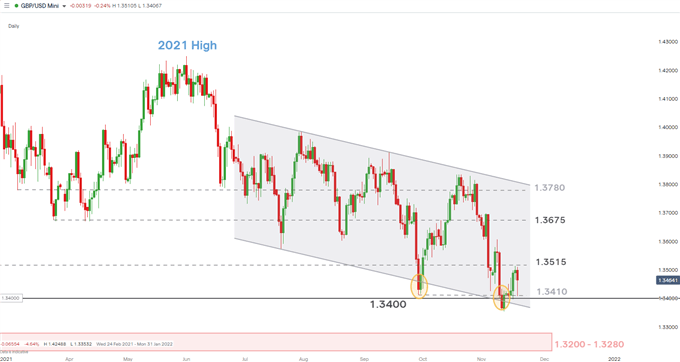 The latest Commitment of Traders (CoT) data for the Pound Sterling reveals a change from slightly net-long to slightly net-short positioning. While it is possible that we may see this change back soon, it certainly raises questions over a strong rebound in the pound. 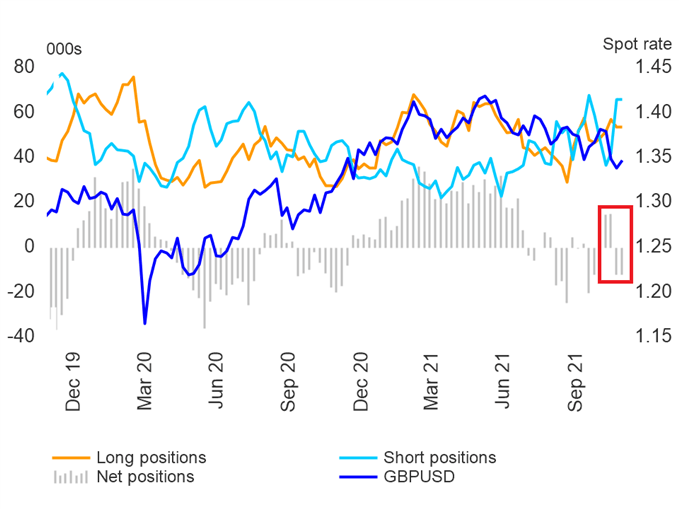 Learn about the insights revealed by the CoT report and why it is important for FX traders.

Quiet Week Ahead on the Sterling Front

The coming week is rather quiet on the data front with the Markit PMI data the only scheduled risk event.