The tech heavy Nasdaq 100 Index retreated slightly on Monday, lagging behind both the Dow Jones and S&P 500. Tech shares may have felt pressure from selling in the Treasury market, as yields pushed higher after the House of Representatives passed a bipartisan infrastructure bill over the weekend. The Nasdaq 100 Index also came under pressure from Tesla, which declined by roughly 5% following Elon Musk’s weekend Twitter pole pertaining to the sale of 10% of his holdings in the company. 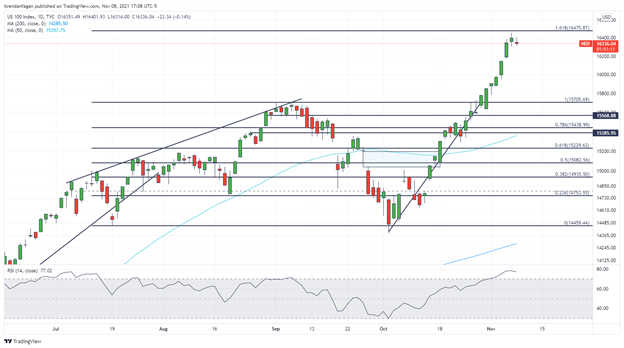 AMC, the beloved choice of many “meme stock” traders, posted a smaller than expected quarterly loss after the bell on Monday as the earnings calendar continues to roll on. Shares were down slightly following the beat, as management highlighted that many challenges remain with the pandemic far from over. AMC noted that all of its U.S. locations were open, and 99% of international locations were open as well. Easing of lockdowns and higher vaccination rates saw nearly 40 million people head back to the cinema during the quarter. Despite the influx of moviegoers, the company still posted an operating loss of $224.2 million.

PayPal was another major name to release quarterly results after the bell, with the company posting a top line miss and a bottom line beat for the third quarter. Despite missing on revenue expectations, the company still posted 13% growth from the same period last year. The company also reigned in guidance for the rest of the year, citing concerns to the economic outlook. Despite this, shares were initially higher in the after-hours session as PayPal announced that it is partnering with Amazon to allow U.S. based customers to use the Venmo platform for payment.