The Dow Jones gapped higher this morning after jobless claims came in lower than expected, potentially justifying a fall taper. Initial jobless claims came in at 326,000 for the week ending October 1, down roughly 38,000 from the previous week. This print now sets the table for Friday’s release of nonfarm payroll (NFP) data, which may have major implications on the Federal Reserve’s taper timeline. This NFP report will be the first full month of jobs data following the expiration of the enhanced unemployment benefits offered throughout the pandemic. The current consensus estimate shows a gain of 500,000 jobs for September. The 10-year Treasury yield also traded higher following the jobs data, as the economy shows signs of returning to full employment.

Despite closing well off of session highs, the Dow Jones still mustered a gain of roughly 340 points on Thursday. Sentiment was noticeably rosier as Congressional leaders in Washington appeared to agree to a short-term deal to raise the debt limit, staving off any worries over a potential default later in the month. The rise in the US 10-year yield helped fuel Dow stocks, most of which are economically sensitive. Of the 30 components in the Dow, only 4 declined on Thursday. The index also notably gapped above key trendline resistance, so market participants will be keeping a close eye on any continuation for a validation of this recent breakout. 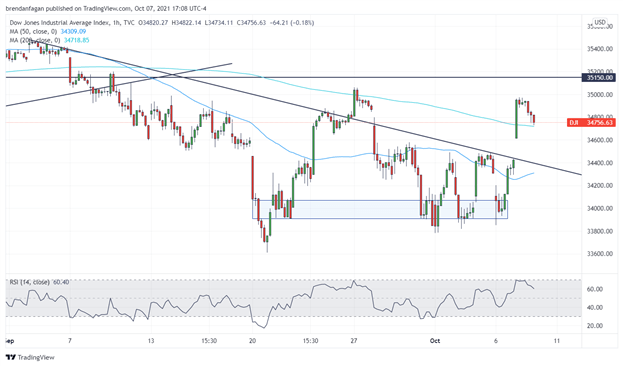 The recent move higher in Treasury yields has accompanied a noticeable shift in sentiment as debt ceiling fears slowly ease. Increased appetite for risk and strong labor market data has pushed the 10-year back to 1.60% and may continue to force yields higher as the economy crawls closer to complete pre-pandemic status. Higher bond yields has helped fuel a recent rally in energy and financial stocks, which has propelled the value-oriented Dow Jones Industrial Average higher of late. Higher yields could see the Dow Jones outperform its counterparts, as the index’s cyclical constituents tend to outperform during the mid-cycle period. 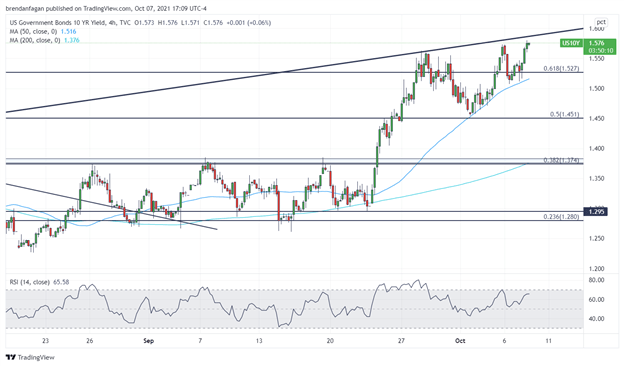