The morning started strong for the South African rand against the U.S. dollar as local IHS PMI data printed above 50 (see data below) for the first time since June which suggests an expansion in business activity.

Unfortunately, for rand bulls this is where the positive news ends (for now at least). Focus is firmly on the United States and the issues surrounding rampant inflation coupled with slow economic growth. The ‘stagflation’ term has been thrown around lately and could hurt the rand should the trend continue.

U.S./China tensions have also been escalating along with concerns around Evergrande. Both influencing factors pose negative implications for the ZAR and are evident through the local equity and bond markets respectively – see chart below. The chart reflects the slump in the JSE Top 40 index while government bonds outflows have risen exhibited by rising yields (declining bond prices) . Less demand for the ZAR thus spilled over to the FX market resulting in rand depreciation, while upcoming local elections will add in extra volatility during Q4 2021.

Emerging Market (EM) peers such as Russia and Brazil have already begun tightening (see chart below) while the SARB still remains accommodative. Of course lower rates suit businesses and individuals looking to borrow capital but there are potential drawbacks in this current economic environment.

The recent rise in inflationary pressure particularly around energy does not bode well for South Africans (net importer) as the weakening currency will further exacerbate the already high energy prices.

Most of the traditional rand linked commodity prices (iron ore, gold, platinum) have been falling/stagnant barring coal (rising energy prices) which has given some respite to the declining rand. The energy rally will likely dissipate in the near future as organizations like OPEC+ gradually increases production levels. 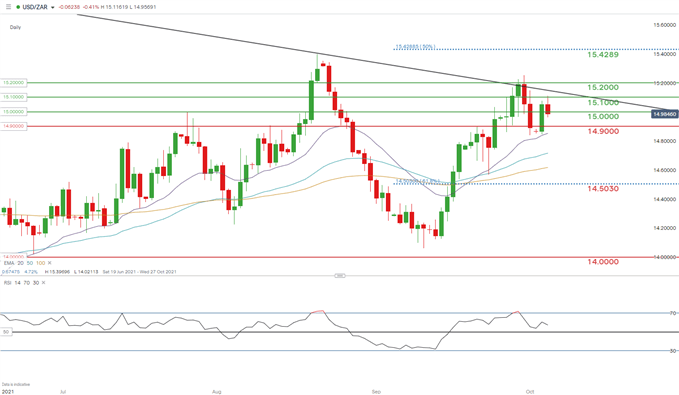 Late last week we saw USD/ZAR prices testing the long-term resistance trendline (black) which has subsequently held back any further advances by dollar bulls. The key 15.0000 handle comes into consideration once more as markets await further fundamental stimulus from the U.S.. There is room for a retest of trendline resistance or a move down to 14.9000 but I do not foresee any wild fluctuations leading up to Non-Farm Payrolls (NFP) on Friday.

The overbought Relative Strength Index (RSI) last week did not extend further but indicated its correlation with trendline resistance.