Australian Dollar Grips On as RBA Delivers on Expectations, Will AUD/USD Rise?

The AUD/USD was little moved on the Reserve Bank of Australia’s October monetary policy announcement. It initially fell but steadied around levels seen just before the statement. The central bank maintained both the cash rate target and 3-year government bond yield target at 0.10%. It kept the amount of government asset purchases to a rate of AUD 4 billion a week at least until mid-February 2022.

Today’s announcement is against a backdrop of soaring energy prices that has seen some of Australia’s exports of coal and liquefied natural gas (LNG) somewhat offset a lower iron ore price.

Earlier in the day, Australia’s trade surplus came in at AUD 15.8 billion, well above the AUD 10 billion the market had anticipated. Prior to that, the economic data released at the end of last month showed August had soft retail sales. However, building approvals were much stronger than expected.

The S&P/ASX 200 was lower prior to the meeting following on from a weak US lead as tech stocks took a battering overnight.

Australian 10-year government yields were at 1.505% and remained unchanged after the RBA announcement. Australian long-term yields had been rising and appear to be having an impact on AUD/USD. Australia-US government bond yield spreads have recently moved in favour of Australian yields at a time when AUD/USD has found firmer footing. 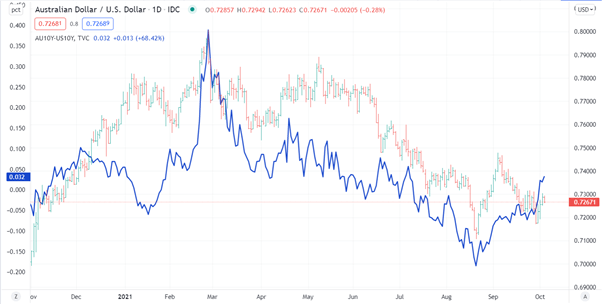 With lockdown restrictions about to ease in New South Wales and other states in the months ahead, economic activity for the 4th quarter could be of more importance to the RBA going forward.

The central bank previously commented that the effects of the current outbreak of the Covid-19 Delta variant is seen by them as a short-term issue for economic disruption. They are looking through the current episode and expect vaccinations rates to be sufficient to re-open the entire Australian economy by early 2022.

Looking ahead, there is not much domestic data due until Australian employment figures on Thursday 14th October. The 3rd quarter inflation numbers are due for release on Wednesday October 27th.