The risk-sensitive Australian Dollar and New Zealand Dollar pivoted higher versus the US Dollar after China’s Evergrande Group reported that it negotiated coupon payments for its 2025 bond due September 23 with creditors. Markets were sinking leading into the announcement, with risk-sensitive currencies falling alongside equities. AUD/USD and NZD/USD then shot higher by around 0.5% immediately following the news.

A liquidity injection from the People’s Bank of China (PBOC) accompanied the Evergrande announcement, which only served to bolster sentiment further. The central bank boosted market liquidity through 60 billion Yuan of 7-day reverse repos and another 60 billion Yuan in 14-day reverse repos. Chinese policymakers stopped short of cutting 1- and 5-year loan prime rates, however. For now, it appears that market-wide contagion risk linked to a potential Evergrande collapse is off the table.

All eyes are now on the Federal Open Market Committee (FOMC) interest rate announcement due in less than 24 hours. Prospects of Fed tapering have likely been compounding the general risk-off tone seen in financial markets as of late. So while sentiment may be rosy for now, with S&P 500 futures pointing higher, investors are not quite yet in the clear. A less-dovish outcome could rekindle risk aversion, undermining recent price action in financial markets. 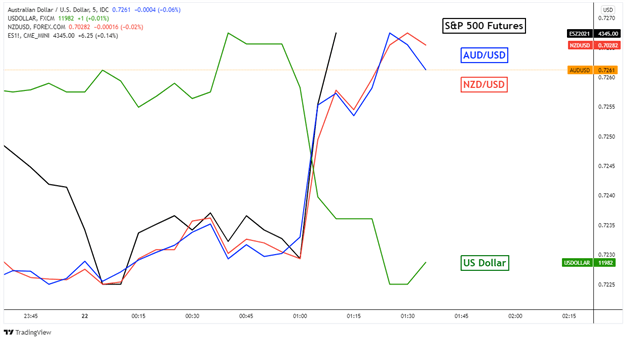 AUD/USD finds itself bouncing off the 0.7222 support point, established when prices hit a low on August 27th. Still, prices are under the 0.7329 – 0.7290 inflection zone in the aftermath of a Bearish Harami candlestick pattern. Both the 50- and 100-day Simple Moving Averages remain pointed lower. The 50-day line may come into focus should prices continue their push higher in the coming sessions.

--- Written by Thomas Westwater and Daniel Dubrovsky, Analyst and Strategist respectively, for DailyFX.com