On Wednesday this week, the crypto market was hit by a massive downturn after Chinese regulators clamped down on the use of cryptocurrencies within their financial system. This may be a play to impose their own Central Bank Digital Currency (CBDC) known as the ‘digital yuan’ into the system or purely to protect itself against the rising volatility and uncertainty around cryptocurrencies.

After an extraordinary rally in cryptocurrencies for 2021, both Bitcoin and Ethereum dropped significantly (with systemic effects across all other altcoins) disrupting many crypto platforms in the process. These outages exposed the underlying fragility of many leading crypto providers including Binance and Coinbase, which brings into question the preparedness of crypto platforms and infrastructure for a mounting market.

How Elon Musk Moves Crypto Markets and should it be allowed?

Prior to the announcement by Chinese regulators, Elon Musk has been toying with crypto markets including Dogecoin (DOGE) and Bitcoin (BTC). This past week he released a tweet outlining why Tesla would not be accepting payments via Bitcoin which kicked off the week’s decline.

The rejection of Bitcoin does bring other cryptocurrencies into favor such as Cardano (AVA) and Ether 2.0. These are just two such digital currencies that offer sustainability within their updated blockchains.

The main point of concern involved with Elon Musk is his ability to derive significant price fluctuation. The clear lack of regulation within the crypto space allows for such brazen behavior and price ”manipulation”. Until such time as the Securities Exchange Commission (SEC) increases their oversite of the crypto market, this exploitation may continue.

The chart below illustrates an overall historical view in terms of the percentage price decline relative to prior drops of Bitcoin: 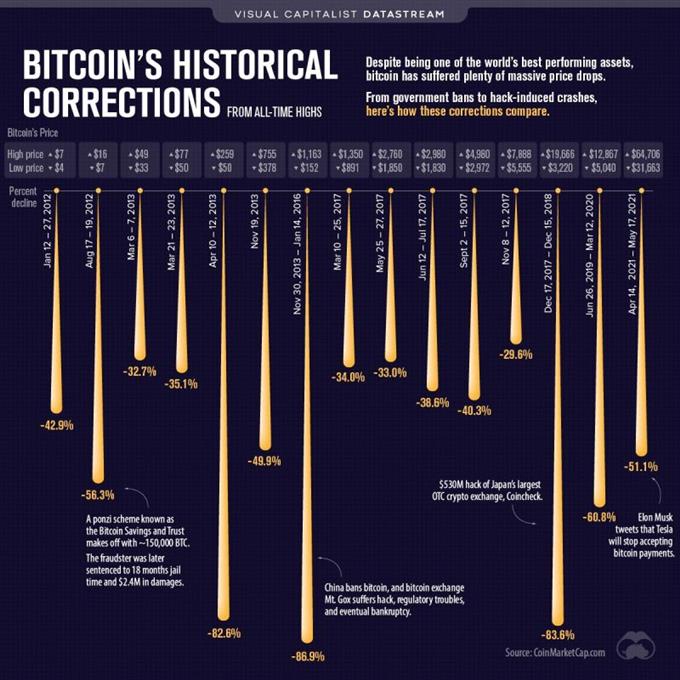 The recent fall in cryptocurrency prices are best reflected by the two largest coins in the world, Bitcoin and Ethereum respectively. Both experienced strong support at key psychological levels (see charts below). Bitcoin is firmly in oversold territory present on the Relative Strength Index (RSI) which could suggest upside to come, while Ethereum is slowly approaching oversold levels so caution should be exercised for bulls at this point. 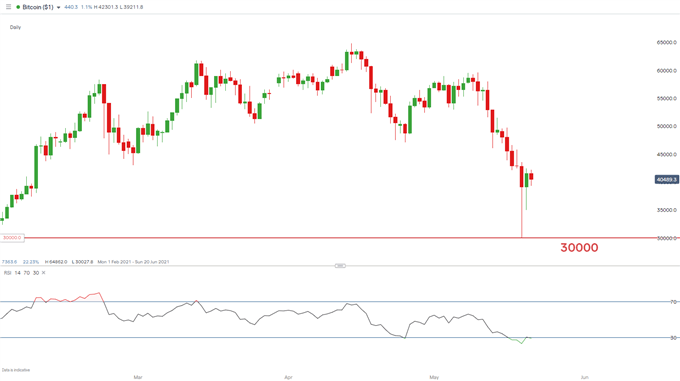 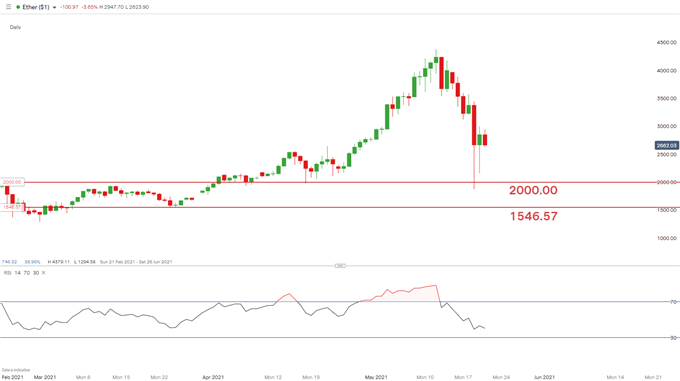 Keep up to date with price action setups!
Becoming a Better Trader in Current Markets
Register for webinar
Join now
Webinar has ended

The U.S. dollar has been on a downward spiral since the end of March 2021, which has lead to higher gold prices. Fears of rising inflation has at the center of recent debates with some parties firm believers that something needs to be done while others are willing to ride out what they believe to be a fleeting spike in inflation figures. Inflation concerns has somewhat fronted an increase in U.S. treasury yields which are currently holding at elevated levels.

The Fed meeting this week has provided some short-term relief for dollar weakness after policymakers mentioned a reduction of bond purchases (tapering) may be on the cards at some point. The Dollar Index (DXY) February 2021 support at 8963.4 was not breached which could see further upside in the near term. The RSI may support this notion as the index has been hovering around oversold territory for some time. 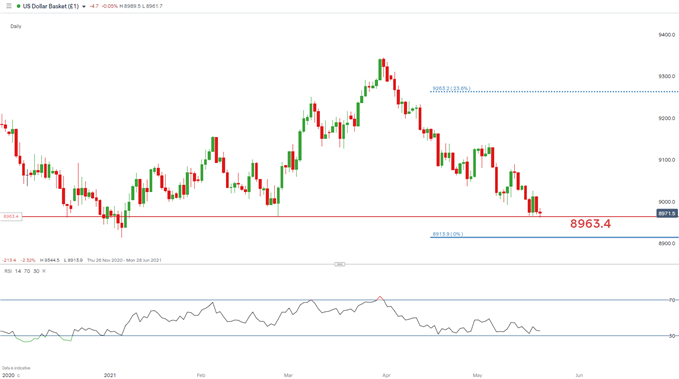