The Australian Dollar weakened following a worse-than-expected Q1 inflation figure. According to the DailyFX Economic Calendar, Australia’s CPI rate for Q1 crossed the wires at 1.1% Wednesday morning on a year-over-year (YoY) basis versus 1.4% anticipated, up from 0.9%. The Reserve Bank of Australia’s trimmed-mean CPI YoY – which excludes volatile energy and food prices – printed at 1.1% against 1.2% estimated, down from 1.2% YoY.

Overnight, AUD/USD moved modestly lower, surrendering a portion of gains from earlier in the week. The currency pair sank following the CPI print and appears to be aiming lower as traders digest the figures. The Reserve Bank of Australia (RBA) has already stated that they expect a transitory rise in inflation later this year, but this may delay those expectations. That said, the worse-than-expected print throws a wrench into forecasts expecting a less dovish RBA in the months ahead.

Nonetheless, the figures represent less upward pressure on prices in the Australian economy, and if sustained, may require a response from the RBA. While still too early to have a meaningful impact, the economic print will likely be reflected in the bond market as rate bet traders adjust their forecasts and act accordingly – likely resulting in a fall in bond yields. On net, the CPI print is a likely bearish tailwind for the Aussie-Dollar.

The next high-impact event on the docket for Australia is next week’s Reserve Bank of Australia May interest rate decision. As with the April decision, economists expect the RBA to hold the benchmark rate at 0.10%. Some are expecting an extension of the central bank’s quantitative easing program, with Westpac’s Evans this week stating such as well as a shift in yield curve control (YCC) to the November 2024 bond. 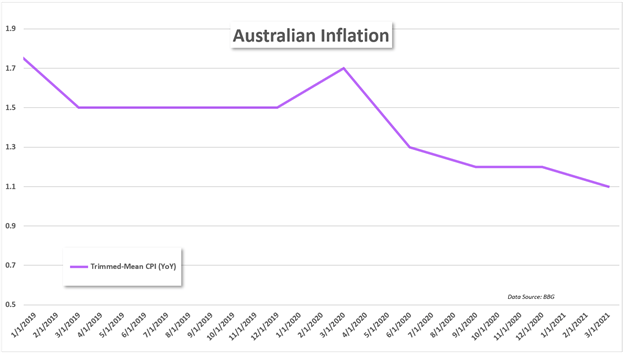 AUD/USD broke below a level that has fluctuated from offering support and resistance over the past couple weeks at 0.7750 after moving lower from 0.78 handle, which appears to be a significant level of resistance. The 50-day Simple Moving Average is now offering support. The currency pair may sink further as traders digest the weak price figures. That said, MACD and RSI are both bearishly postured on the 8-hour time frame. 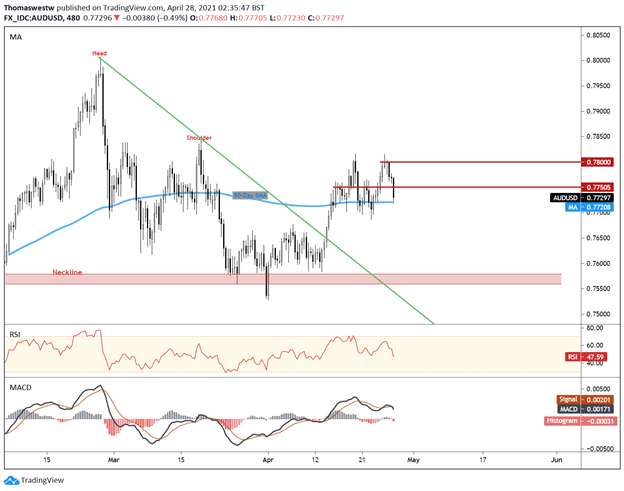