The Japanese Yen strengthened slightly against the US Dollar in the wake of the Bank of Japan’s recent meeting, despite the central bank leaving its monetary policy settings unchanged. The BoJ left its Yield Curve Control target on 10-year JGBs steady at about 0%, and held the policy-balance rate at -0.1%.

However, policymakers did upgrade the nation’s GDP forecast for 2021 and 2022, with the economy expected to grow by 4% this year (3.9% previously) and 2.4% next year (1.8% previously). A linguistic change in the central bank’s description of the local economy’s outlook from “extremely unclear” to “highly unclear” may also be behind the rather buoyant reaction of the Yen.

Attention now shifts towards the Federal Open Market Committee’s meeting on Thursday to determine to near term trajectory of US Treasury yields. Sovereign bond yields have been a key determinant of the Japanese Yen in recent months. 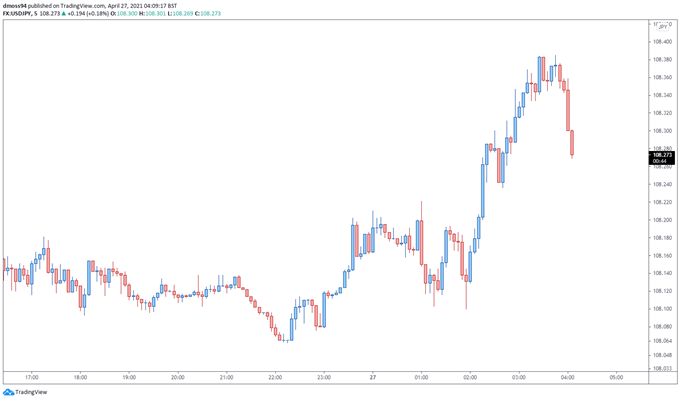 State of Emergencies to Keep JPY on Back Foot

The marked tightening of coronavirus restrictions in several Japanese prefectures justifies the BoJ’s dovish stance and will probably keep the Japanese Yen on the backfoot against its major counterparts. State of Emergency declarations in Tokyo, Osaka, Kyoto and Hyogo have been implemented in response to a continued rise in Covid-19 cases, resulting in fans being banned from major sporting events and facilities with a floor space of more than 1,000 square meters closing.

The sluggish rollout of vaccines suggests that these measures may be kept in place for a prolonged period of time, as cases surge to the highest levels since January. Only 1.4% of the Japanese population has received at least one dose of a coronavirus vaccine, significantly less than the vaccination rates seen in the UK (49.6%), US (41.9%) and EU (21.4%).

Moreover, with a bullish technical setup beginning to take shape on US 10-year Treasury yields, the reinvigoration of the carry trade could intensify downward pressure on the Yen. The formation of a bullish Rising Wedge pattern above psychological support at 1.5% suggests that yields on 10-year Treasuries may accelerate higher in the near term.

Indeed, with rates still tracking above all three moving averages, further upside is certainly a possibility. With that in mind, JPY may continue to lose ground against USD in the coming weeks.

From a technical perspective, the USD/JPY exchange rate outlook could be at risk of further declines in the coming weeks, as prices collapse below key range support at 108.35 – 108.55 and test the trend-defining 55-EMA (107.96) for the first time since late-January.

With the RSI and MACD indicators tracking firmly below their respective neutral midpoints, the path of least resistance does indeed seem skewed to the downside.

However, with the uptrend extending from the yearly low still intact, and price tracking above all three long-term moving averages, a resumption of the primary uptrend can’t be ruled out.

Ultimately, a daily close back above the 21-EMA (108.61) is needed to validate bullish potential and bring psychological resistance at 109.00 back into focus. Clearing that paves the way for buyers to challenge range resistance at 109.60 – 109.85.

Alternatively, a daily close below the 38.2% Fibonacci (107.77) could intensify selling pressure and lead to a more extended pullback towards psychological support at 107.00. 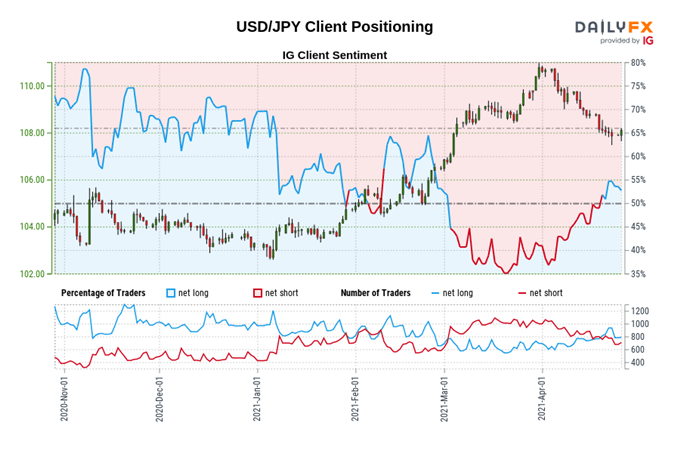