The New Zealand Dollar was relatively flat against the US Dollar following the Reserve Bank of New Zealand’s (RBNZ) April interest rate decision on Wednesday. The island nation’s central bank held its Overnight Cash Rate (OCR) at 0.25%, as widely expected. NZD/USD is nearly unchanged on the day despite the inherently dovish stance of holding the OCR at a record low and stating that if needed, the Committee is prepared to go lower.

New Zealand’s economy is in danger of a double-dip recession following a worse-than-expected Q4 GDP print which revealed a 1.0% drop in economic growth for the three months through December 2020. While New Zealand has contained Covid within its own borders remarkably well, the country’s aggressive lockdown policy likely has weighed on economic output.

A near-term rise in inflation is likely to be viewed through a transitory lens by RBNZ policy makers, in line with the Federal Reserve’s current stance on prices. The NZ government, under political pressure, revised the RBNZ’s remit to consider the effects of home prices when making its monetary policy decisions last month. The OCR statement did concede that the new housing policies are likely to weigh on house price growth but will need time to assess the overall impact on inflation.

Governor Adrian Orr previously warned against such a move, worrying over the impact it would have on the central bank’s goals regarding prices and the labor market. While true, the RBNZ’s house price forecasts were already on the modest side. Both the Large Scale Asset Purchase (LSAP) and Funding for Lending Programmes were kept unchanged, with LSAP purchases staying at an upper limit of $100 billion by June 2020, per the OCR statement.

NZD/USD has broken above the upper bound of a Falling Wedge pattern earlier this week, which was followed by a moderate push higher to the current price near the 0.7060 level. The currency pair is now aiming to breach above the early April high of 0.7069. A move higher would see the 100-day Simple Moving Average (SMA) shift into view. Alternatively, a move lower would see the wedge’s former resistance move back into focus. 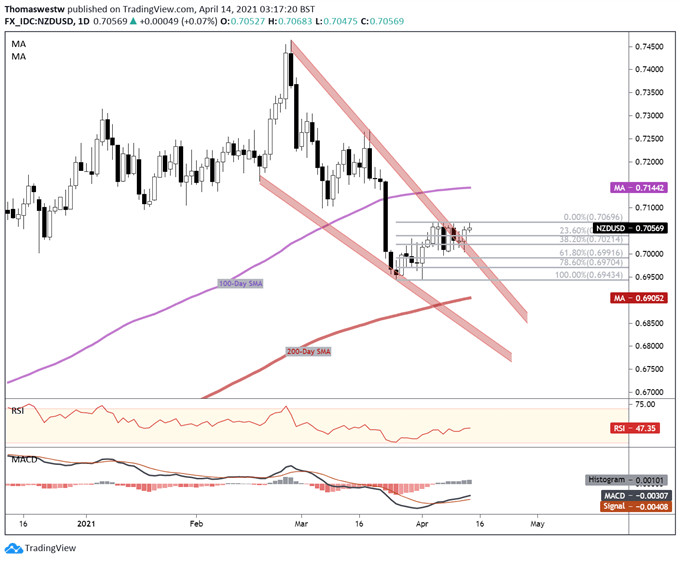