Heading into 2021, our ‘bottom line’ on the Aussie technicals noted, “the Australian Dollar price rally has matured with an advance of more than 37% off the yearly lows risking topside exhaustion in the months ahead. From a trading standpoint look for signs of a high in the first quarter to give way to larger correction – ultimately a pullback may offer more favourable opportunities closer to uptrend support.” The rally registered a high at 8007 in late-February before reversing sharply lower with the decline approaching the 2021 yearly opening-range lows just days ahead of the March close. Was that the high we were looking for?

Recommended by Michael Boutros
Download the full AUD 2Q forecast!
Get My Guide 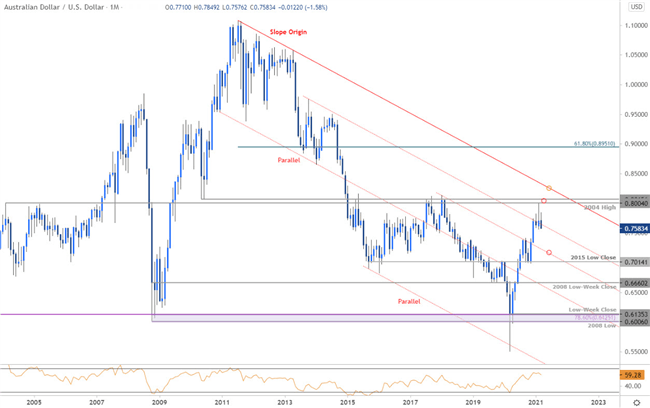 A breakout of the 2018 slope-line noted last quarter kept the focus higher into the yearly open with the advance marking an intraweek high into technical resistance at 8004/65. The region is defined by the 2004 swing high, the 2010 low and the 2017/2018 close highs. Aussie posted a massive outside-week reversal off that high with the subsequent decline covering nearly the entire yearly range. 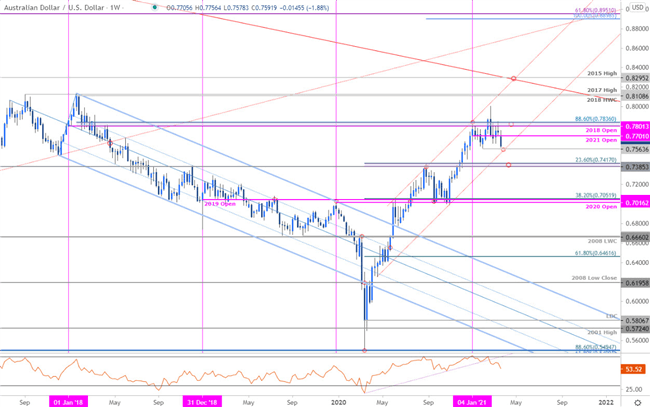 The weekly chart shows AUD/USD approaching confluence support at the yearly swing low / April channel line at 7563 -- look for inflection off this threshold into March’s close for guidance. A close below would threaten a break of the yearly opening range and suggest a more significant high may have occurred in February. Such a scenario would risk a larger correction towards the May 2017 low-week close / 23.6% retracement of the 2020 advance at 7385-7417. Yearly-open resistance at 7701 with a breach / close back above 7801/36 would be needed to mark resumption of the broader uptrend.

Bottom line: The broader Australian Dollar rally has turned off uptrend resistance on building momentum divergence with the pullback now eyeing the first major test of uptrend support since November. From a trading standpoint, look for topside exhaustion ahead of 7700 if price is heading lower with a break below this channel risking a larger Aussie correction in 2Q.