Offshore Yuan at Risk vs US Dollar as Reflation Hopes Build

The offshore Chinese Yuan halted an eight-month rally against the US Dollar and retreated February-March 2021 as optimism surrounding a robust economic recovery and smooth vaccine rollouts for the US buoyed the Greenback. The approval of a US$1.9 trillion Covid relief package favored by the Biden administration further boosted reflation hopes. The resulting rapid rise in longer-dated Treasury yields led to a rebound in the US Dollar Index (DXY) from a two-and-half year low.

Year-to-date, USD has strengthened against a majority of Asian emerging market currencies such as IDR, THB, KRW, SGD and CNH. The seemingly “one way” trajectory of USD/CNH appears to be under threat by a faster-than-expected economic recovery in the US as well as uncertainties surrounding Chinese growth.

The Federal Reserve revised up this year’s GDP growth forecast to 6.5% at the March FOMC meeting, a notable increase from December’s forecast of 4.2%. Vaccine rollouts and government stimulus are likely to provide a major boost to economic activity. On the other hand, Chinese policymakers set this year’s GDP target at above 6%, lower than most economists’ forecasts above 8%. A conservative GDP goal reflects the government’s concerns about domestic and external uncertainties, including the lingering impact of the pandemic, US-China tensions and soft job market conditions.

While USD/CNH has rebounded from a two-and-half year low, the Federal Reserve’s dovish-tilted policy guidance and the PBOC’s neutral stance suggest that the currency pair may lack significant upside potential.

Technically, USD/CNH hit a multi-year trendline extending from 2014 lows through to early 2021 and has rebounded since. Holding above this level would likely intensify buying power and carve a path for price to challenge the next resistance level at 6.588 – the 23.6% Fibonacci retracement. The RSI indicator has bottomed from the oversold threshold of 30, suggesting that selling pressure has been depleted. 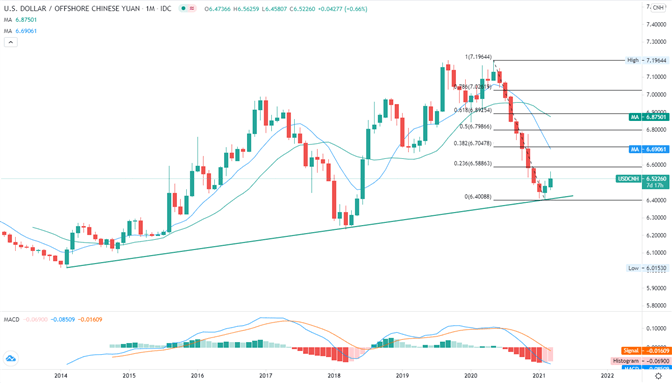