China’s National Bureau of Statistics (NBS) released Purchasing Managers Index (PMI) figures for its manufacturing and services sectors on Wednesday morning. The manufacturing sector continued to expand in March, with the figure crossing the wires at 51.9 versus expectations of 51, and up from the prior month’s 50.6 read. Non-manufacturing PMI – commonly referred to as the services component – came across at 56.3, also up from the previous month. 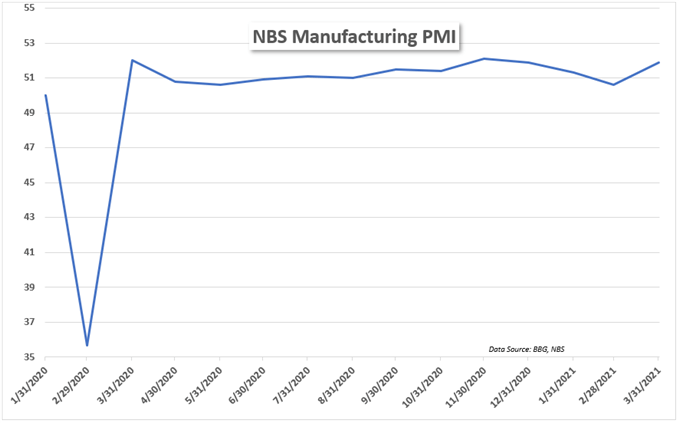 The better-than-expected PMI figures highlight China’s robust yet still-fragile economic recovery despite the Lunar New Year when a chunk of the labor force typically is off work for the holiday. Additional waves of Covid across the globe have likely weighed on the manufacturing index, as government lockdowns and social distancing measures hamper foreign demand for Chinese goods.

USD/CNH’s reaction to the data print was largely muted, but the strong prints may help underpin Chinese Yuan strength in the coming days. However, the safe-haven US Dollar has been strengthening against its major FX peers, and the Yuan is not excluded from that list. USD traders are focused on tomorrow’s speech from US President Joe Biden when the western leader is expected to outline massive spending plans to boost economic activity.

That said, relations between China and the United States, including other western nations such as Canada, remain strained. While the Biden administration is paving its own path for foreign policy, leftover drama from the Trump administration remains, and it is becoming clear that a return to a more friendly partnership between the two major economies is still a ways off, if at all. Caixin PMI figures next week will serve as the next possible catalyst for the Yuan.

USD/CNH’s weekly time frame highlights trendline support going back to 2014, with the current move higher extending from that support level. The 23.6% Fibonacci retracement from the May – February swing lower is now presenting a potential area of resistance. Prices may consolidate near this zone before moving higher. 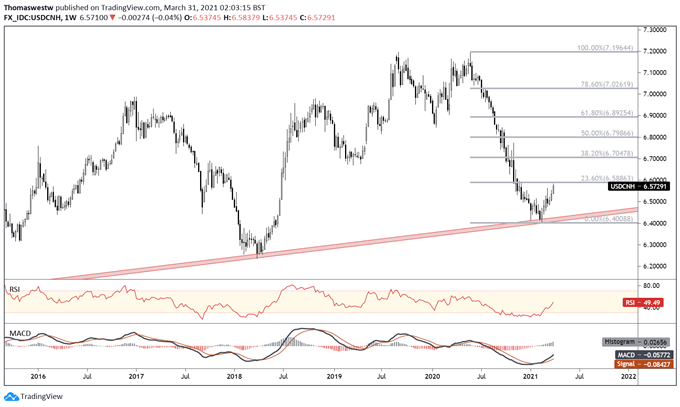