The Chinese Yuan strengthened against the US Dollar, on the back of a series of robust data releases that highlight the nation’s V-shaped economic recovery. Of course, these figures are somewhat distorted by base effects, given they are comparisons from a year ago when the economy essentially went into hibernation.

Nevertheless, industrial production and retail sales data convincingly beat consensus estimates, coming in at 35.1% (est. 32.2%) and 33.8% (est. 32%) respectively. The unemployment rate however, climbed to 5.5% (est. 5.2%) which hints at underlying weakness in the local labour market, perhaps on the back of sporadic virus lockdown and the Lunar New Year holiday break.

That being said, the broadly positive release will probably pave the way for the local currency to continue strengthening against the haven-associated US Dollar in the coming weeks. 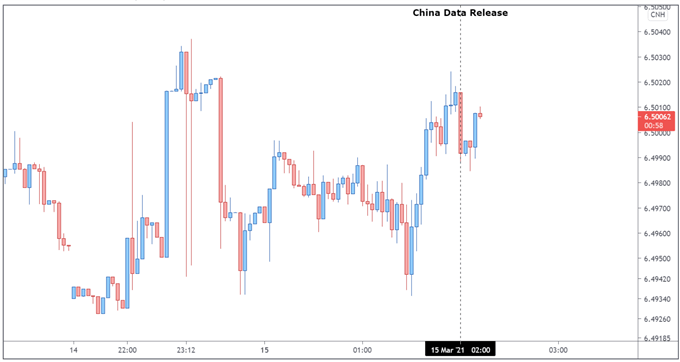 Attention now turns to the upcoming meeting between Chinese and US delegates in Alaska on March 18-19, representing the highest-level in-person talks between the two economic superpowers since President Joe Biden was inaugurated in January.

Relations between the two sides deteriorated drastically during the former administration, and may remain rather strained given the recent comments from US Secretary of State Antony Blinken, who will be part of the envoy alongside National Security Advisor Jake Sullivan.

Blinked stated in testimony before the House Foreign Affairs Committee that China has consistently undermined the “international rules-based system that the United States has devoted so much effort to building”, and added that “we’re going to be making very clear to our counterparts in China the deep concerns, objections we have to some of the things they are doing and to see if they will address those”.

This suggests that tensions could be at risk of escalation if both sides fail to see eye-to-eye on several contentious issues, ranging from the Taiwan-US relationship to China’s actions in the South China Sea. Indeed, Chinese Foreign Minister Wang Yi has chastised America for “wilfully interfering in other countries’ internal affairs in the name of democracy and human rights".

Nevertheless, with Blinken stating that the US approach to China will be “competitive when it should be, collaborative when it can be and adversarial when it must be”, and Wang pointing to climate change as an area where both sides can find common ground, escalation to the levels seen under the Trump administration seems relatively unlikely.

With that in mind, the risk-gauging USD/CNH exchange rate may resume its primary downtrend in the coming weeks, as market participants price in a more cordial US-China relationship. 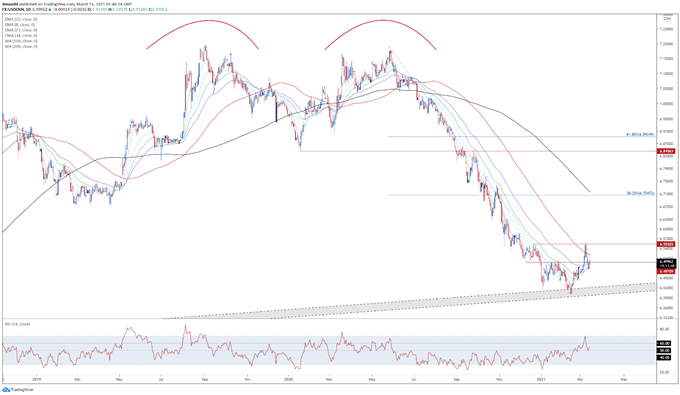 From a technical perspective, the USD/CNH exchange rate could be poised to extend its recent recovery from the lowest levels since June 2018, as price dives holds constructively above the trend-defining 55-EMA (6.4906).

However, with price tracking firmly below the sentiment-defining 200-MA (6.7150) and the RSI hovering just above its neutral midpoint, an extended topside push seems relatively unlikely.

With that in mind, failing to gain a firm foothold above the monthly high (6.5625) on a daily close basis would probably encourage would-be sellers and open the door for price to retest the yearly low (6.4000), if the exchange rate slides back below the 34-EMA (6.4797).