Next week will see the RBNZ deliver its first monetary policy announcement of the year, where expectations are for the central bank to stand pat on current monetary policy. However, in light of the recent run of stronger than expected economic data, the focus will be on the RBNZ’s updated forecasts as well as Governor Or’s presser.

At the last meeting, the RBNZ provided a hawkish surprise given that the NZ economy had performed significantly better than the central bank’s pessimistic forecasts, which in turn saw a sharp re-pricing of negative rates in the front end of the curve and subsequently prompted a sizeable bid in the Kiwi. Since the November meeting, it appears as if the RBNZ has once again underestimated the recovery in the NZ economy as domestic data has outperformed the RBNZ’s forecasts. Q4 CPI printed 0.3ppts higher than the RBNZ had assumed at 0.5% Q/Q and 1.4% Y/Y, the bounce back in Q3 growth had been firmer than expected at 14% (vs 13.4%) and the unemployment rate saw a sizeable drop to 4.9%, which had been 0.7ppts below the RBNZ’s estimate.

Not only that, but the global economy also looks to be in better shape with vaccine programs underway, while a democratic sweep has raised the prospect of a larger US fiscal stimulus package. In turn, the central bank will likely acknowledge this growth outperformance and thus forecast a quicker return to pre-COVID levels than previously expected, subsequently, reducing the need for further monetary stimulus.

However, a cause of concern for the RBNZ’s inflation outlook will be the Kiwi’s strength on a trade-weighted basis, which currently hovers at multi-year highs at 74.55, and is notably higher than the RBNZ’s forecast of 71.5. In turn, risks remain for RBNZ jawboning, which could come in the form of extending LSAPs beyond Mid-2022, much like the RBA. That said, while this would place initial pressure on the Kiwi, downside would likely be short-lived. 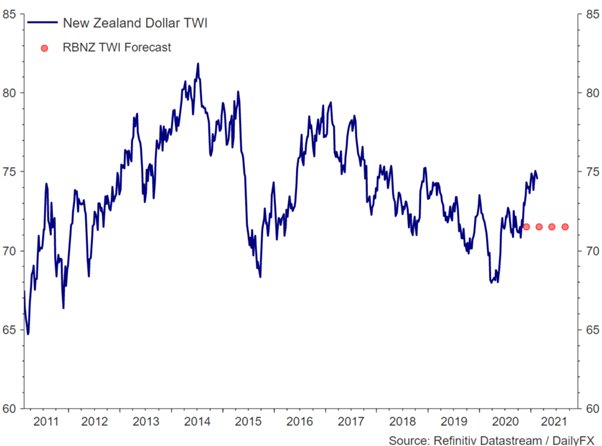 Overall, the outlook remains positive for the NZD, which continues to ride the reflation theme, this also looks to be reflected in positioning data as speculators remain long NZD. However, this could suggest that upside against the USD in the short run could be somewhat limited, given that a lot of good news has been priced in. 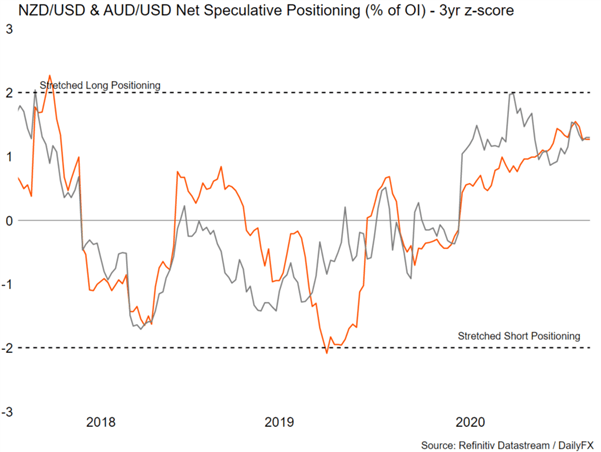 In turn, my focus is on AUD/NZD, which has bounced back to 1.08 despite the RBA’s best efforts to keep pressure on the Aussie. The cross currently trades at rich levels relative to spreads and while the RBNZ has the proclivity to surprise, it is unlikely that the RBNZ will match the dovish stance of the RBA. Another factor that has also garnered attention in recent sessions is US-Sino tensions resurfacing, in which AUD has a higher beta relative to NZD. With that in mind, I would prefer to fade the strength in AUD/NZD from 1.08, looking for a move back to 1.06. 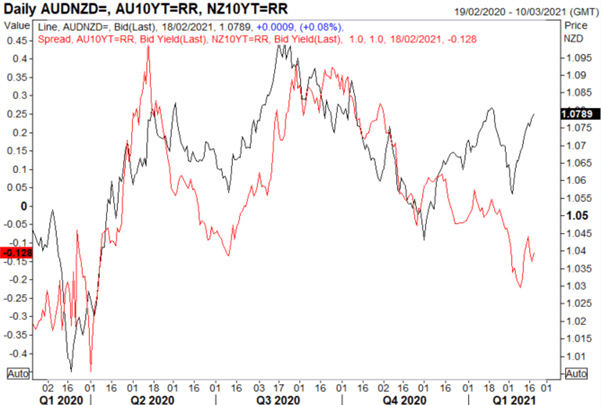