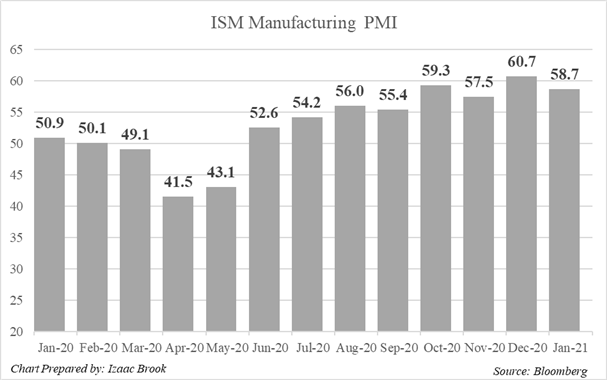 Manufacturing PMI serves as an important proxy for US GDP data, giving markets a closer and more timely look at an important component of the US economy. PMI prints above 50 denote an expansion and below 50 denote a contraction.

While manufacturing continues to fare well despite rising Covid cases, the aggregate US economy continues to struggle. Durable Goods orders for December printed at their lowest level since April and consumer sentiment remained weak in January. January’s Services ISM prints on Wednesday and will give markets a closer look at the most important component of the US economy.

On the economic policy side, January’s FOMC meeting saw little change in the Fed’s stance. While the Biden administration has announced details surrounding a $1.9 trillion fiscal stimulus package, bipartisan cooperation on further economic relief looks less and less likely. GOP members have recently proposed a much smaller $618 billion relief plan, opening the door to prolonged debate and negotiation. Although vaccine rollouts offer a light at the end of the tunnel, logistical hurdles and challenges still need to be met. In the meantime, the virus has continued to spread. 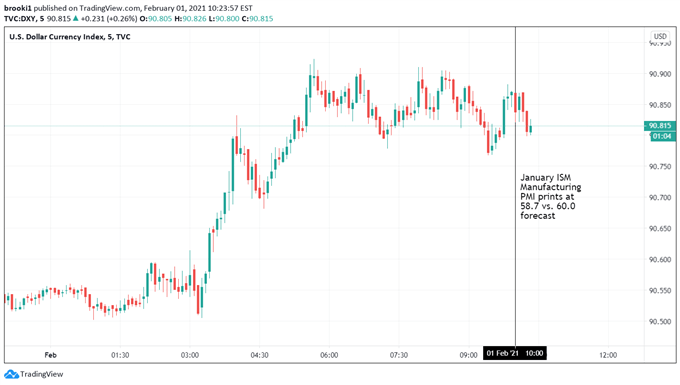 January’s Manufacturing PMI had little impact on the US Dollar. The DXY dropped slightly but continues to hold around 90.85, near its January highs. The DXY bottomed in early January around a two-year low of 89.25 after continued weakness into the new year. It has since rebounded back above 90.00 and has surged towards the end of January amidst heightened volatility stemming from US equity markets. Further moves in the Dollar might be tied to equity market price action this week. 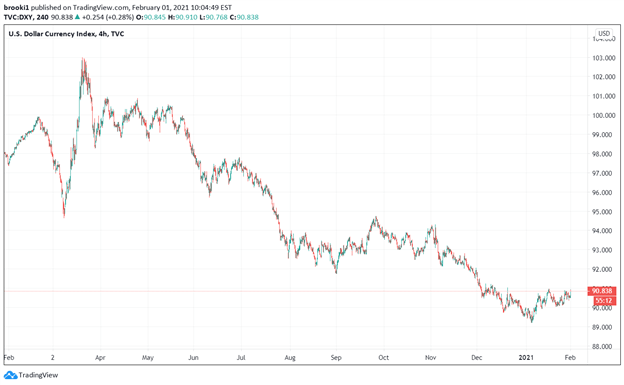 As far as US economic fundamental go, markets are looking towards Wednesday’s January Services ISM and Friday’s January jobs numbers. Globally, Euro-area GDP and inflation prints could have an impact on markets, although expected weakness has already been conveyed by Europe’s central bankers.