The popular discussion around the COVID-19 pandemic in South Africa has been around the new and supposedly ‘more transmissible’ strain. Professors, doctors and researchers presented yesterday about their findings. The new strain exhibits stronger binding potential to the human cell which has been an influential factor in the sharp rise in cases and deaths locally. With vaccine roll-out procedures underway, many South Africans are weary of the affect the vaccine will have on the new strain due to minimal testing. Despite the concerns by the public, the Rand has shown resilience against he U.S. Dollar this week and is likely to continue with additional stimulus expected by the newly led U.S. administration. 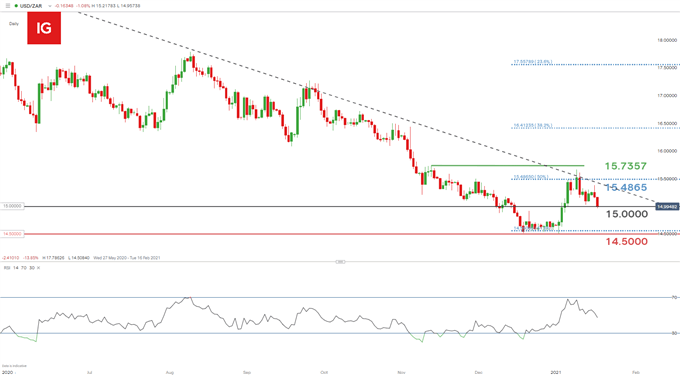 The ZAR has appreciated roughly 1% today (at the time of writing) primarily due to weakness in the greenback. Price action shows the 15.0000 psychological level being tested. If support at this level is broken, a large opening for significant downside may occur toward the 14.5606 (61.8% Fibonacci level) support zone.

Yesterday’s failure to reach diagonal resistance (dashed black line) may suggest increasing bearish momentum which could be expedited by this week’s economic releases.

Should the slim chance of a rate cut occur, this may lead to ZAR weakness which could bring the medium-term diagonal resistance into consideration once more.

With a few key data announcements scheduled this week (see economic calendar below), the SARB interest rate decision will be the main focus for analyst and traders. As mentioned in my previous article, consensus amongst economists is that the Reserve Bank will persist with the current 3.5% rate – originally set and sustained since July 2020. Although this week focuses on South African specific data, the inauguration of President-elect Biden on Wednesday may cause some disturbance in the Dollar and consequently USD/ZAR.

The chart below shows a simple overlay of interest rates (orange), inflation data (green) and the USD/ZAR spot rate. It is clear that the most recent interest rate cut last year has resulted in a gradual increase in inflation however, the inflationary pressure is largely controlled as the current level remains below the midpoint of the projected target level. The current economic environment is extremely accommodative which points to attention on structural reforms - as previously touched upon by the Monetary Policy Committee (MPC).