The trade-sensitive Australian Dollar drifted lower after a mixed bag of economic data releases from its largest trading partner.

Although Chinese GDP came in above market expectations at 6.5% (est. 6.2%), disappointing retail sales figures for December suggest that the local economic recovery may have cooled slightly at the tail end of 2020.

That being said, industrial production figures showed that the manufacturing sector is continuing to outperform, which suggests that demand for Australian minerals may remain elevated in the coming months.

Attention now turns to Australian employment data and a flurry of PMI releases on Thursday, with the local unemployment rate expected to decline from 6.8% to 6.7%. 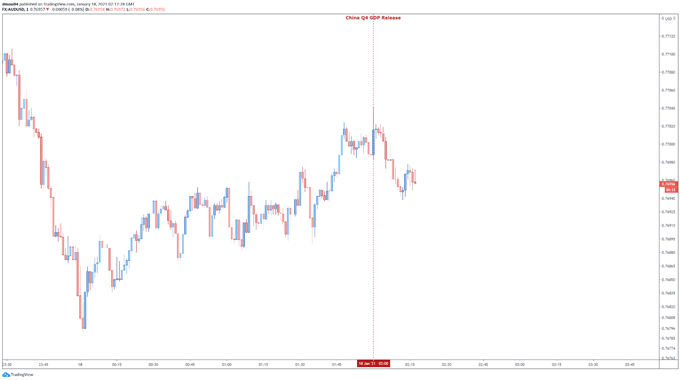 Drop in Chinese Iron Ore Demand May Weigh on AUD

The notable drop-off in Australian iron ore exports to China may be behind the turn lower seen in the AUD/USD exchange rate in recent days, as overall demand drops to its lowest levels since early December.

This substantial reduction in exports could be due to the latest outbreak of coronavirus on the mainland, with the nation recording its highest number of infections since March and leading to the imposition of draconian lockdowns on three cities in Hebei province.

Of course, given China’s previous success in suppressing outbreaks it seems relatively unlikely that case numbers will markedly move higher and force restrictions to be in place for an extended period of time. 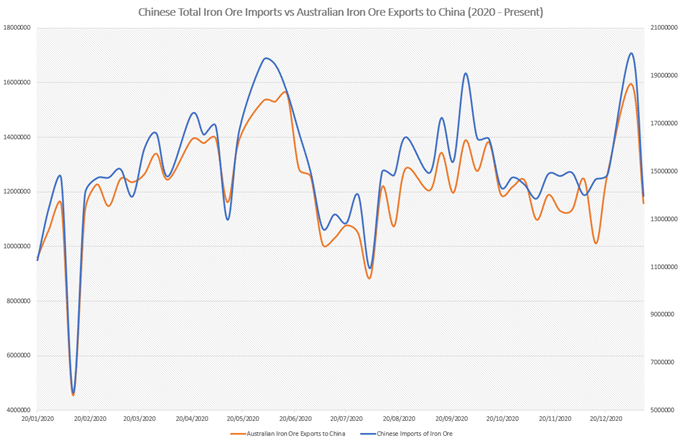 Nevertheless, with Chinese New Year celebrations just around the corner there is a significant risk that domestic travel could lead to an exponential spread of the virus.

Indeed, local authorities have warned that the latest strain has been found to “last longer, spread wider, and transmit faster, with a higher percentage of elderly and rural patients”.

With that in mind, traders should keep a watchful eye on ongoing health developments. A continued rise in cases probably results in the imposition of tighter restrictions and may limit overall iron ore demand in the near term.

From a local standpoint, the Australian economy has continued to rebound robustly, as the island nation’s successful suppression of Covid-19 has allowed a return to normality.

Retail sales figures in November showed consumer spending surged upon the relaxation of social distancing measures in Victoria – Australia’s second most-populous state – while job vacancies soared by 23.4% in the fourth quarter of 2020. 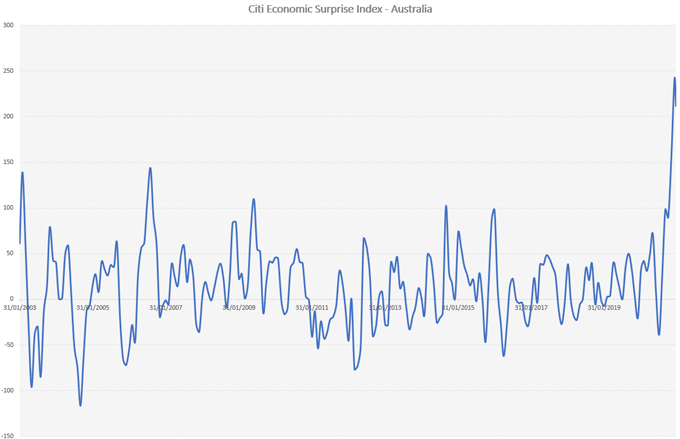 Bjorn Jarvis, head of Labor Statistics at the Australian Bureau of Statistics (ABS) stated that “there were 254,000 job vacancies in November, which was higher than the pre-Covid level in February”, adding that “this reflected the pace of recovery in labor demand in the second half of the year and labor shortages in some industries”.

Moreover, the Citi Economic Surprise Index has spiked to record highs, on the back of the strong rebound in consumer confidence and economic activity.

A continuation of this promising trend could underpin the local currency against its major counterparts in the medium to long term, as several nations around the world continue to grapple with surging coronavirus infections. 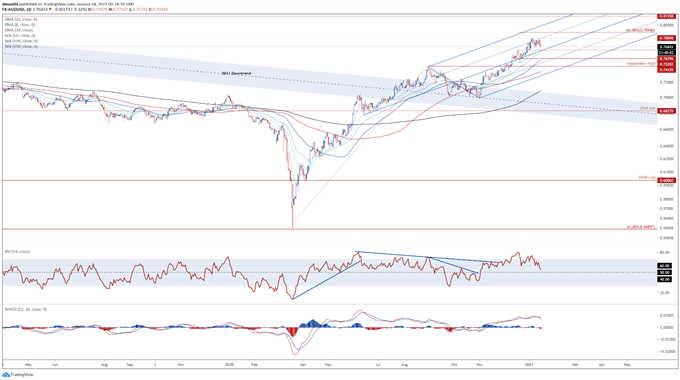 The technical outlook for AUD/USD remains skewed to the topside, as price continues to travel above the sentiment-defining 200-day moving average and within the confines of an ascending Andrews’ Pitchfork.

However, with a bearish crossover on the MACD indicator taking place, and price slipping back below the 8-EMA (0.7723), a more extended pullback could be in the offing.

A daily close below confluent support at the Pitchfork median and December 17 high (0.7639) could intensify selling pressure and open the door for sellers to drive the exchange rate back towards the trend-defining 50-MA (0.7500).

That being said, if support at 0.7640 holds firm a rebound back towards the monthly high looks relatively likely. Gaining a firm foothold above 0.7810 on a daily close basis is probably required to signal the resumption of the primary uptrend and bring the psychologically imposing 0.8000 mark into focus. 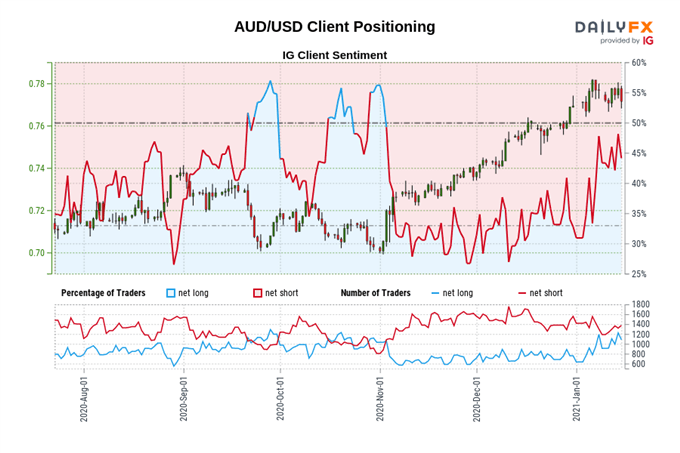