A likely Democratic sweep in Georgia’s Senate runoff elections led to a diverging sectoral pattern on Wall Street overnight, as market participants attempted to price in more aggressive fiscal and infrastructure spending under the Biden Administration. With Democrats likely in control of both Congress and the White House, materials, financials and energy sectors outperformed, sending the Dow Jones index 1.44% higher. On the other hand, Nasdaq 100 fell 1.4% as tech giants may face even more scrutiny from US lawmakers and a potential increase in corporate tax rates.

While the political skies are clearer with both Democratic candidates Jon Ossoff and Raphael Warnock likely winning the runoff elections (chart below), pro-Trump protestors are gathering outside the Capital Building. A chaotic situation may dampen investors’ risk appetite in Asia-Pacific trading today. 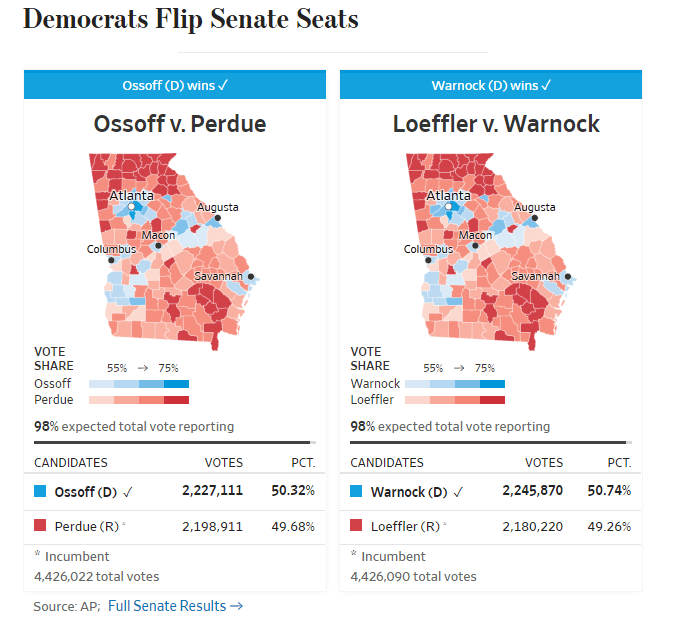 In Asia, Japan’s Nikkei 225 traded 1.28% higher in response to positive US leads overnight. Domestically, a state of emergency is expected to be declared for greater Tokyo today as the Covid-19 situation deteriorated in the capital and surrounding regions. More stringent measure might be imposed on restaurants and bars in the wake of rising viral infections. The Nikkei 225 index came off from a three-decade high earlier this week.

Australia’s ASX 200 index advanced 1.22% at open, boosted by strong performance of materials (+2.71%) and energy (+2.68%) sectors. A Democratic sweep outcome may continue to support base metal, material and energy prices that tends to benefit Australia’s metal and mining stocks. Similar to the US stock market, information technology (-0.76%) is the only sector trading lower in Australia this morning. The commodity-linked Australian Dollar advanced to 0.7814 – the highest level seen since April 2018. 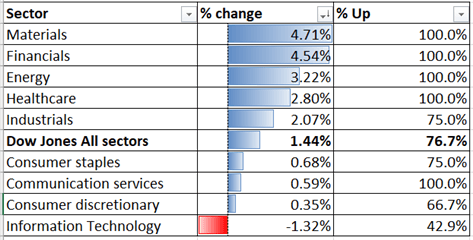 On the macro front, the latest FOMC meeting minutes revealed that all Fed members favored maintaining the current pace of asset purchases of US$ 120 billion per month, while some participants were open to further adjustments. There appears to be little clue to major shifts from Fed’s current policy stance. The US Dollar continued its downward trajectory. Today, the Eurozone core inflation rate, Canadian balance of trade and US weekly jobless claims are among the top events today. Find out more from DailyFX calendar.

Technically, the Dow Jones is edging higher within an “Ascending Channel,” as highlighted in the chart below. The uptrend is well-supported by its 20-Day Simple Moving Average (SMA) line, which is at 30,290 now. The index is challenging a key resistance level at 30,870 – where the upper ceiling and the 100% Fibonacci extension intercept. Breaking above this level may open the room for further upside potential, whereas a pullback may lead to a test of the 20-Day SMA for support.

The Nikkei 225 index has broken a range formed since early December as highlighted in the red color below, and has since entered a period of consolidation. Prices came back and retested the upper bound of the rectangle before bouncing higher. The overall trend remains bullish-biased as suggested by upward-sloped 20-, 50- and 100-Day Simple Moving Average (SMA) lines, albeit some further consolidation could be seen in the days to come before attempting higher highs.

The ASX 200 index remains within its “Ascending Channel,” as highlighted on the chart below. However, upward momentum appears to be faltering as the MACD indicator trends lower. An immediate support level can be found at 6,630 – the 161.8% Fibonacci extension level. A firm break down below this level may open the door for further losses. An immediate resistance level can be found at 6,750 – the upper Bollinger band.