This week has been a rollercoaster for the USD/ZAR pair as a plethora of fundamental factors were revealed. From a South African perspective there has been a postponement of unemployment data, marginally lower than expected inflation figures for September (YoY) and the Medium Term Budget Policy Statement (MTBPS) by Finance Minister Tito Mboweni.

The much talked about US stimulus package has been abandoned in terms of a pre-election release, while upcoming US elections remains at the forefront of the global political landscape. Positive US Q3 GDP (QoQ) numbers yesterday reflected in a risk-seeking mood with the Rand outshining its Emerging Market (EM) counterparts.

Click on the market reaction to election for more!

This has been represented in a choppy week for USD/ZAR with price swings of roughly 40 cents (ZAR). Despite a poorly received MTBPS and the global pandemic, the Rand has remained resolute with sustained appetite for risk which remains within the USD/ZAR multi-month downward trajectory.

According to a statement released by Fitch Ratings, “Fitch kept South Africa's rating on Negative Outlook following the downgrade to 'BB' in April, partly due to the prospect of further significant pressure on government debt.” 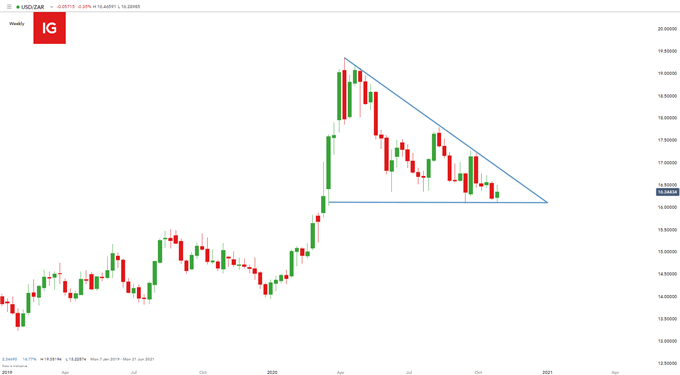 The weekly chart above reflects a possible descending triangle formation however, the triangle is preceded by an uptrend as opposed to the textbook downtrend. Typically, a descending triangle pattern is a bearish continuation pattern which could see further ZAR appreciation.

New support may be established at the 16.1000 zone as the price pushed off this level after uncertainty around US stimulus negotiations. If the week ends above 16.1000 it may be assumed that this support zone will be recognized going forward and provide the basis for the completion of the triangle pattern. 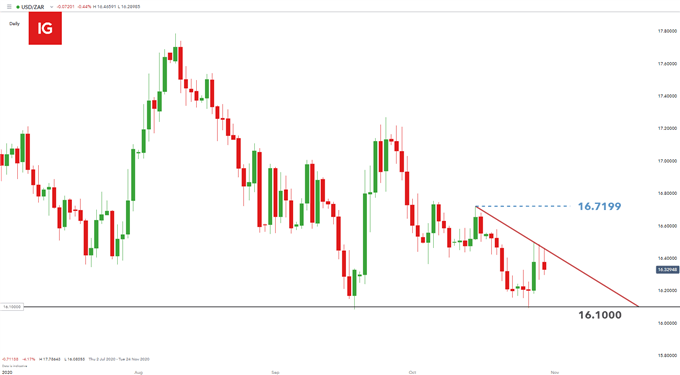 The Rand is trading higher against the US Dollar today in spite of the gloomy local outlook. A short-term diagonal resistance (red) has emerged which could provide an upward push if broken above. For now, further downside is supported by global factors with 16.1000 as initial support.

The rest of the day includes Balance of Trade figures for South Africa (12:00GMT) while the US is set to release Core PCE Price Index (12:30GMT) and Consumer Sentiment (14:00GMT) data. It is unlikely these will cause major price action on the USD/ZAR pair but any major variation from estimated values may result in a significant swing. 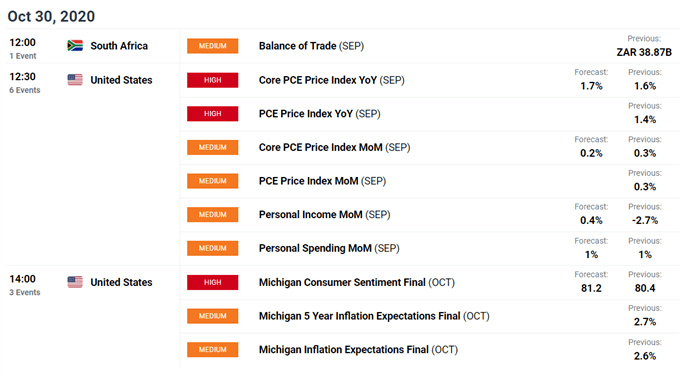 Next week is riddled with various economic events but also the most anticipated event of the year according to many market participants - the next US President of the United States will be announced. Lots to look out for over the coming days which makes following news events and announcements imperative for USD/ZAR trade strategies.

The Rand remains undervalued according to the PPP model and preferred by global investors for the appealing carry. This sentiment may change going into a period of higher expected volatility and possible uncertainty of announcements. This could lead to investors shying away from high beta assets such as the Rand in favor of safe-havens. This is yet to be decided and largely dependent on outcomes next week. Local news and announcements will probably remain underrepresented within the USD/ZAR pair with systemic US fundamental factors sure to remain at the forefront of price action.