The Monetary policy Committee (MPC) voted on Thursday to keep South Africa’s repo rate unchanged. The South African Reserve Bank (SARB) Governor, Lesetja Kganyago announced that the decision had been made with close consideration to the expected economic lift for Q3 and Q4, maintained inflation over the medium term and the fact that elevated commodity prices have contributed to a robust trading environment.

central bank announcements can have great implication for FX markets. Find out How Central Banks Impact the Forex Market

Analysts were mixed in their expectations between holding or cutting the interest rate and the market seemed to have been similarly undecided ahead of the meeting with price action showing no discernable direction. The chart below shows the immediate move lower for the pair as Kganyago explained that the future implied policy rate path did not project any further cuts for the remainder of 2020 and even allows for a potential rate hike in the second half of 2021. However, should there be any threats to the current outlook that appear through observed economic data, the Reserve Bank stands ready to react appropriately. 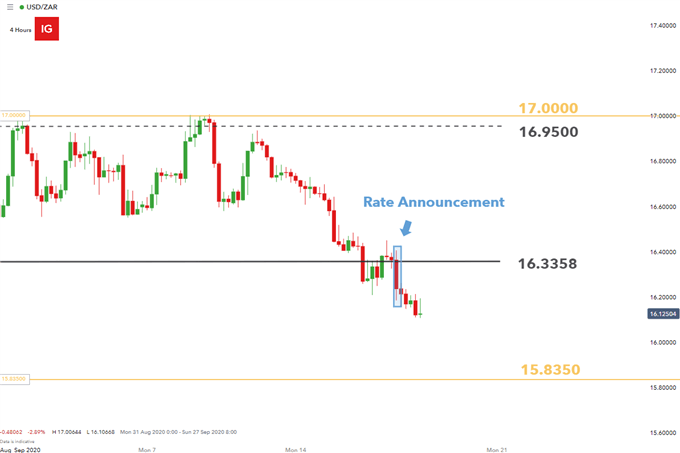 The daily chart below shows continued Rand strength as the rate decision seems to have buoyed ZAR bulls even further after the breakdown of the 16.3358 level of support. Further rand strength would bring the 61.8% Fib level (drawn from the Jan low to April high) into focus at roughly 16.0000. The 16.0000 figure also represents a psychological round number and may have some influence in future price action.

However, off the back of such a strong and sudden move, it would not be unusual to see a slight retracement of the current bearish momentum. USD/ZAR bulls may focus on a rebound off the 61.8% level that would turn the focus back to the 16.3358 resistance level. Continued upward momentum brings into play the 16.9500 and 17.0000 levels. 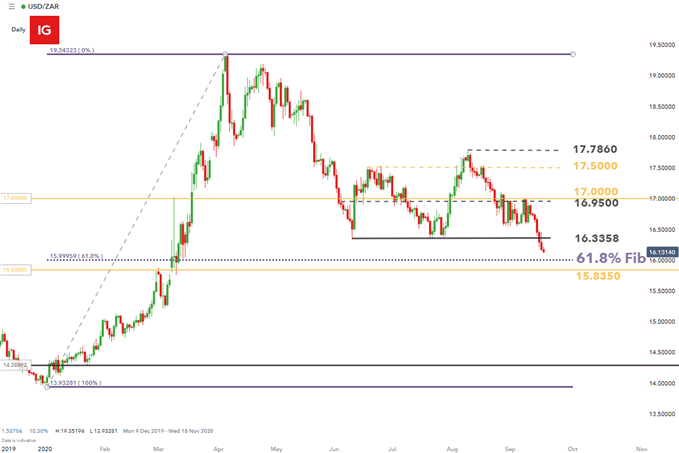