GBP/USD is trading in a narrow range ahead of the Federal Reserve’s monetary policy decisions due to be announced after the close of European markets Wednesday at 1900 BST. Those decisions will likely determine whether the pair breaks upwards or downwards, although it may continue to range trade until the Bank of England’s policy announcement Thursday. Neither central bank will move interest rates so the focus will on whether their statements are hawkish or, as expected, dovish.

Find out here how central banks impact the FX markets

In the meantime, there has been little reaction to the latest UK inflation data. The headline rate dropped to 0.2% year/year in August, its lowest for nearly five years and down from 1.0% in July. However, that was above the zero forecast by analysts and was shrugged off by Sterling traders. 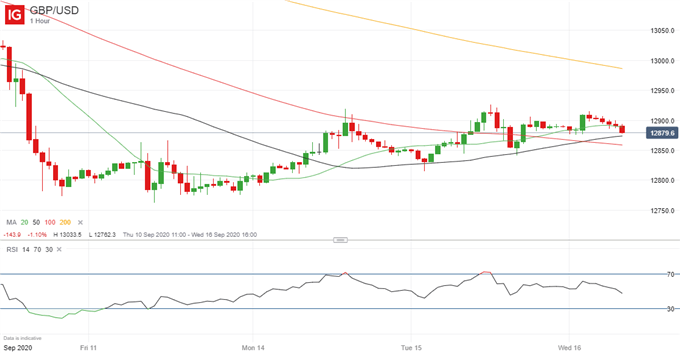 Data and monetary policy aside, the main focus for Sterling traders continues to be Brexit as the UK Parliament debates the Internal Market Bill that would break the UK’s Brexit treaty with the EU. The Government is currently talking to rebels within the ruling Conservative Party to ease its passage and Justice Secretary Robert Buckland said Wednesday that he believes there is a way through.

So far, the markets have taken this in their stride and will likely continue to do so as the UK and the EU continue to talk on a so-far-elusive post-Brexit trade deal.