The Rand has been progressively strengthening since mid-August with most of its gains coming from global ‘risk-on’ sentiment and a weaker US Dollar. The spotlight has now shifted to the domestic situation with South African Q2 GDP figures released earlier today (9:30GMT). This week has already seen the ZAR give back gains against the greenback as markets prepared themselves for the depressing GDP figures. With Statistics South Africa (StatsSA) having announced a -51% QoQ (Q2) and -17.1% YoY (Q2) contraction which exceeded previous forecast estimates (see calendar below), USD/ZAR has extended the ZAR sell-off. Most sectors reflected negative contributions to economic growth however, agriculture stood out with a noteworthy positive input. 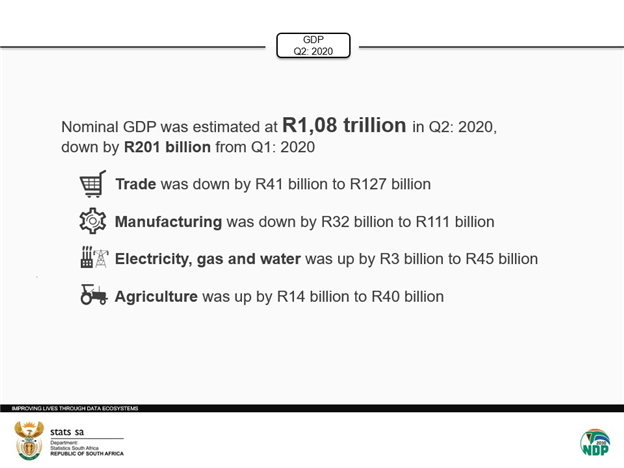 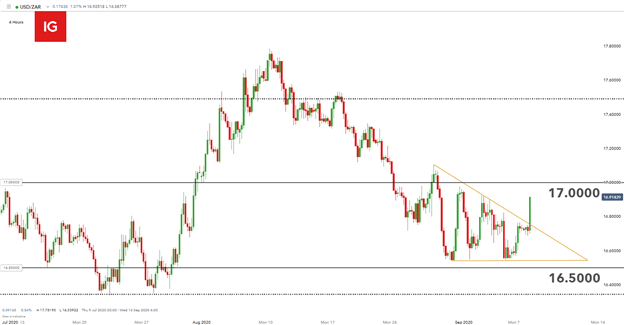 The descending triangle (yellow) formation indicative of a bearish continuation, is now superseded after the deep contraction was announced. This break above trendline resistance may further USD/ZAR price ascension to the 17.000 psychological level. Bears may look for added downside on hopes that the market reaction may have been exaggerated. It is difficult to ignore the medium-term downtrend but significant economic news such as GDP cannot be overlooked as a potential source of price reversal.

The South African economy is in turmoil with the power utility Eskom continuing with ‘load shedding’ (blackouts) which hinders capacity and economic growth for businesses. This added strain does not aid the country taking into account the global COVID-19 pandemic.

Tax revenues augmented the economic pain with revenues declining relative to last year’s MoM figures. This is expected during these unprecedented times but being a developing nation, it generally takes longer to recover from such depression cycles and less tax revenue is not favorable. Corruption is still a major concern as the State Capture Inquiry (Zondo Commission) continues where the public demands justice for those who have looted the state. While the government has so many long standing issues to juggle, there are some positives for South Africans to look forward to.

The African National Congress (ANC) may be taking small strides in the right direction with President Cyril Ramaphosa looking to tackle corruption within the ANC however, with many party members against him this is a steep uphill battle.

South Africa has recently moved to level 2 lockdown status which allows for an increase in tourism as inter-provincial travel restrictions are lifted. There has already been an increased demand for local tourism during this period which is encouraging for economic recovery. International travel will be next on the agenda and with the tourism playing such a pivotal role for the economy and employment, government will need to show great care in their approach to ensure a cautious re-opening.

With many South Africans being strong advocates for renewable energy as a solution to ongoing Eskom issues, this may be a great way to aid the already struggling economy. Eskom currently provides roughly 90% of the nation’s power which is heavily reliant on coal-fired power stations. In order to keep businesses fully functional, many believe that alternative energy sources may be the long-term solution. Many European countries have already done away with coal as a source of fuel and South Africa may use these successful models as a blueprint to implement a suitable and adaptable plan locally.

The mining sector in South Africa is at 75% capacity in terms of workforce and output which is highly correlated to the Chinese economy. With China looking to fuel growth this is likely to drive further benefits for the local mining sector.

South Africa has worked hard to maintain its status as Africa’s most advanced economy and will need to impose radical change to remain at the top.

The Rand has shown its exposure to the local fundamental backdrop but with so many macroeconomic factors to consider the variables affecting the ZAR can become difficult to comprehend. With the US Dollar in for potentially tumultuous times ahead with US elections on the horizon, how will this affect the USD/ZAR pair in H2?